Last year I decided to splurge and buy both major season passes available in Colorado: EPIC, which is Vail’s offering and includes access of some kind to A-Basin, Keystone, Breckenridge, Vail, and Beaver Creek; and Rocky Mountain SuperPass (RMSP), which is good at Eldora, Winter Park, Copper Mountain, Steamboat, and Crested Butte.

Of course, just as I decide to do that, we get one of the worst snow seasons on record. We are worried about water supply in the summer, as the snow melt is going to be insufficient, but right now I am more concerned about the tree stumps that are not covered and the runs that didn’t open until well into February.

Also, any crap season is good enough to throw the world of ski resorts into major turmoil. Whether that’s the problem or something else I cannot say, but I ended up buying the last RMSP season ever issued. RMSP is dead, as well as another competitor, M.A.X. They are replaced by a brand new pass that takes into account the shake-up in the industry.

What happened is that Vail Resorts (of EPIC) bought Whistler-Blackcomb from Intrawest, which runs Winter Park and Steamboat in Colorado. To make things more confusing, Intrawest renamed itself Alterra and is now a private company, still headquartered in Denver. And to top it all off, Alterra is co-owned by the company that runs Aspen, and synergies seem to emerge.

The end of all confusing happs is the emergence of a duopoly that is reflected in season passes. The old EPIC pass will continue, and will doubtlessly continue to be very popular. In fact, it snagged not only Whistler-Blackcomb, but also Crested Butte in its lineup. The pass will continue to offer some of the finest mountains in North America, including Whistler and Vail, two of my favorite three.

END_OF_DOCUMENT_TOKEN_TO_BE_REPLACED 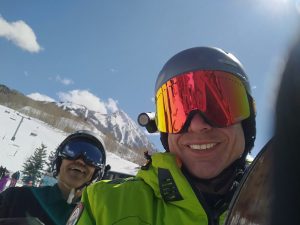 It’s been a tough year for travel. I had to deal with a lot of work, and if I found the time to snowboard, I rather shot up I-70 to my favorite haunts than drive for hours and days just to slide down a mountain I didn’t know. I mean, I am some 75 minutes from some of the finest resorts in the world, do I really have to fly to marginally better or really just different mountains?

Well, my friend C came to visit and he is an avid snowboarder. We make a point of always traveling to some place neither of us has seen, since we want to experience surprise in equal amounts, and there were quite a few mountains even in Colorado I had never seen before. Since I had the Rocky Mountain SuperPass and it included time at Crested Butte and Steamboat, I asked him to pick one of the two and he chose the correct one: Crested Butte!

[It was correct simply because it then turned out RMSP would not include Crested Butte next season, so this was my last chance to see the place for free!!!!]

A friend of mine, always the generous, let us stay at his condo in Downtown Dillon (as it were). So we decided we’d make a road trip out of it: drive to the condo in the evening, then to Crested Butte the next day.

Driving from Dillon to Crested Butte

There are basically two main ways to get to CB in the winter. Both are well-traveled highways, so either one is cleared of snow in a timely fashion. The last part of the drive is the same for both, while the two forks connecting with Denver are as different visually as you can imagine.