Colorado is justly famous for its mountains. The Rockies rise up in the middle of the continent like a wall meant to stop colonization and make the place rugged, remote, and scenic.

Alas, humanity is really good at beating down nature, and the Rockies were no match for our relentless pursuit of wealth and suburbs. By now, there are homes everywhere in the state, except where Federal land ownership prevents construction. But the mountains are still there, marvelous in their beauty and isolation.

Colorado is also famous for a few other things. People think it cold (which it really isn’t, thanks to abundant sunshine and thin air) and they are reminded by the name of the state of the river, the mighty Colorado that scoured the Grand Canyon in the almost infinitely long time it has been flowing.

Take these three things: the mountains, the snow, and the Colorado River, and put them all in one place. That’s bound to be the most Coloradan place in the state, right? And that’s what is Rocky Mountains National Park. Home to both the headwaters of the Colorado river and Longs Peak, one of the most prominent Fourteeners in the United States. Land of hikers and backpackers and hordes of tourists. 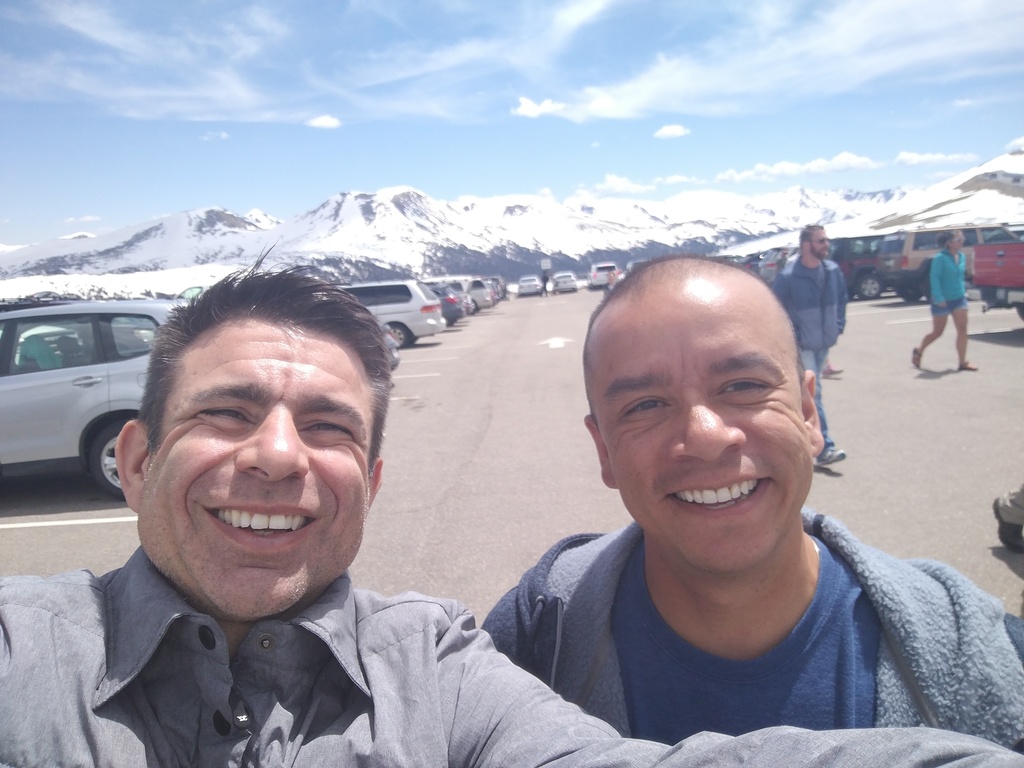 There is only one road that cuts through the park, the aptly named Trail Ridge Road. Most people drive it East to West, starting in the very picturesque town of Estes Park, climbing up to the Alpine zone, and then descending into the Colorado River Valley. Every year, the road is closed when the snow storms make passage impossible. Every year, Coloradans wait for the weekend when the snow is cleared and we can all drive to the most beautiful landscape to stand in an endless line of cars.

Getting into Estes Park is easy. You follow one of the three highways, US 36, US 34, or CO 96, that converge onto the town. You also can’t miss Estes Park: once you enter the valley, you’ll see a beautiful town surrounded by high mountains in a green valley, just behind a reservoir. It’s a spectacular setting, as evidenced by the number of real estate companies that set up shop in town.

Stop in Estes Park for a drink or food, it’s totally worth it. High up on a hill in the North, you’ll see a white building. It’s the Stanley Hotel, where Stephen King stayed during his residence in Boulder and where he came up with the idea for The Shining (the hotel in the movie look different than this, because it is actually Timberline Lodge near Portland).

Estes Park was already crowded when we got there. The cars were snaking their way through traffic and pedestrians and even after we left town, we were caught in the endless line to get into the park almost as soon as the buildings had made way for Alpine Meadows.

It took forever to get to the park entrance, mostly because the whole thing is poorly organized. You can’t pay your ticket in advance, which means 80% of the time spent is just in handing money over. That could have been easily organized by advance payment from the car. But it’s also a way to monitor congestion, I suppose. Note that the Park advertises only the daily fee ($20 at the time of writing), the weekly fee ($30 – the daily ticket used to be valid for a week), and the yearly fee for this park ($60). The park also has the All National Parks yearly access, which is $80 and a much better deal. 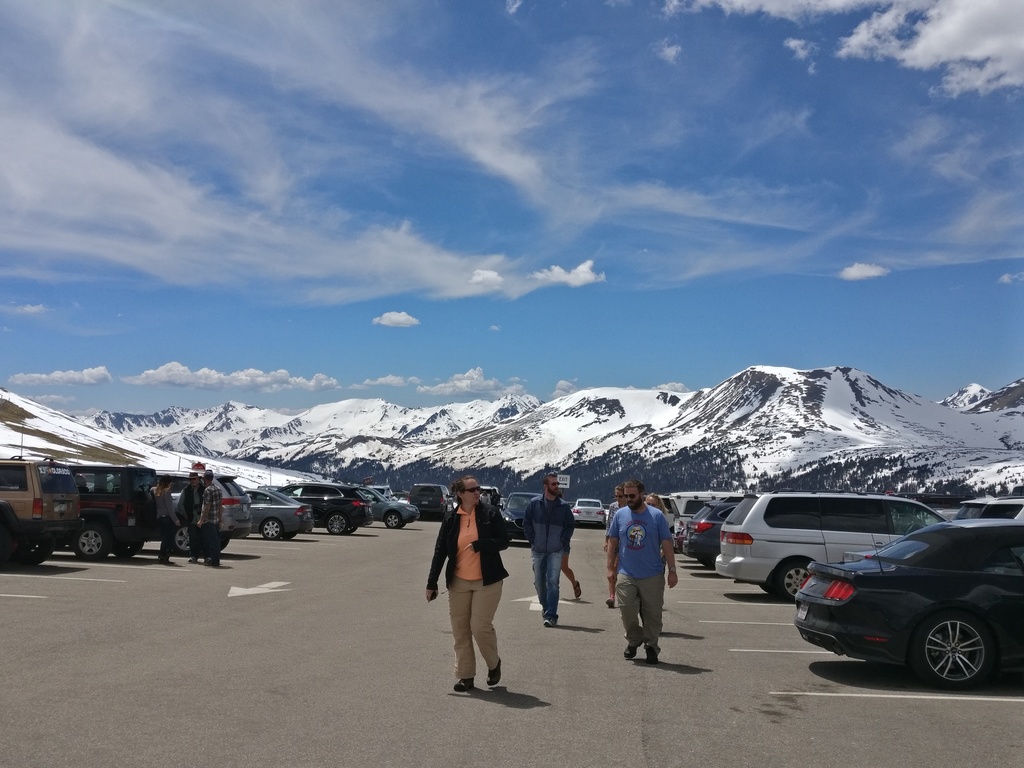 The Visitor Center at the park entrance (Beaver Meadows Visitor Center) doesn’t really have anything spectacular to show, but is highly remarkable for its architecture. If you are a fan of the Taliesin School (Frank Lloyd Wright) you may want to stop, as it’s one of the highest-profile commissions for the School after the founder died.

After that, prepare yourself for crappy driving. I don’t know what it is, but people seem to think the park is their oyster and they behave like they own the road. People will stop in the middle of the pavement despite there being tons of turnoff. Do not pass unless you have to! In the end, you’ll just be going a few inches ahead and the effort is not worth risking.

The ascent the follows is spectacular whether you have seen mountains this height before or not. The road drops off into canyons and ravines to the left and right, while the majestic peaks around you seem forever out of reach. On the South side, the enormous face of Longs Peak, by far the tallest mountain in the park.

You’ll see people leaving the road to the left and right. Those spurs mostly lead to parking lots that are trailheads. The park is full of hiking trails and the hikes are spectacular, challenging, and not as crowded as the road (but not by much). 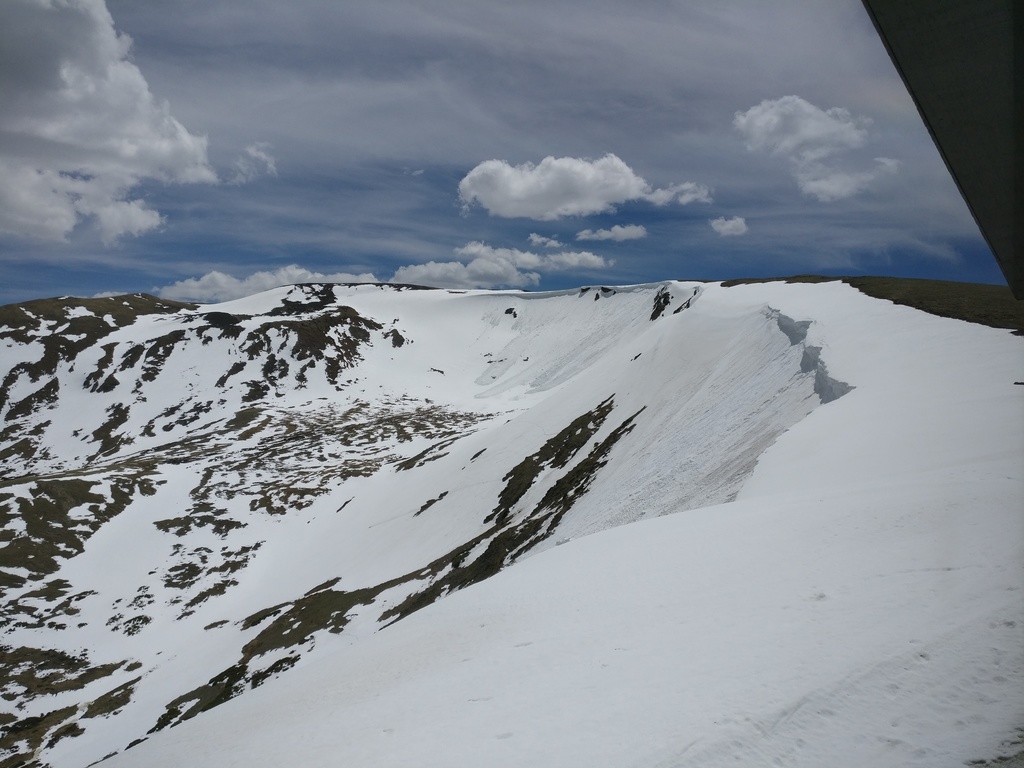 Eventually, you’ll climb high enough that snow will pile up against the road, at least in June (the snow will eventually all melt and you will drive surrounded by dirt and rock). The landscape changes beyond the tree line, and the road starts being a little scary. There is no guard rail and no shoulder, and you can’t see how steep it is on your side. Be careful and watchful!

You’ll get to an overlook on the opposite side of the road (stop and take pics!), and shortly thereafter you’ll hit the Alpine Visitor Center. When we were there, the restrooms in the Information Center were closed (because the plumbing was still frozen, hooray!), so there was a line a mile long (maybe a dozen people) at the restrooms outside. There are more restrooms farther down, at the various trail heads, so don’t bother with standing in line unless it’s urgent.

The Alpine Visitor Center consists of two buildings. The one on the left is the shop/cafe. Masses of people walking past souvenirs of all kinds. I suggest you pick something up if you are not a local, you’ll long remember this trip. The other building is the information center (and has the restrooms). It also has a viewing platform (snowed in when we were there) that is worth checking out (the exhibit is not so special).

Drive on and you descend into a new valley. At the far end, the probably prettiest mountain range in the park. Also, the one with the best name of any mountain range: the Neversummer Mountains, after whom the famed snowboarding equipment company is named. (Their boards have legendary status in Colorado, especially because you apparently never get them on sale.) 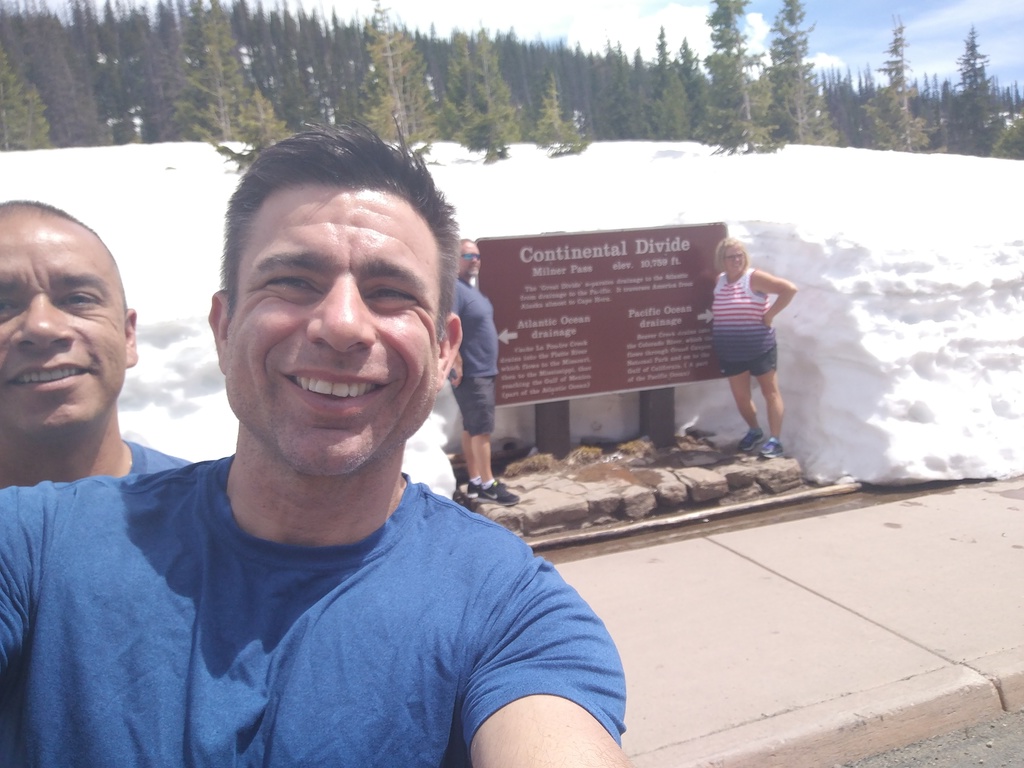 Get back into the car and drive on. A zillion trillion switchbacks are waiting for your enjoyment! At the bottom, you’ll notice a parking lot. You should stop there and take the short stroll over to the Colorado River, which here is more a creek and bears no resemblance to what it will later become, the mighty flow that cut the Grand Canyon. (This is as good a moment to remind everyone that the upper stretch of the Colorado River used to be called the Grand River, which seems a little far-fetched for the the stream you’ll see. But there references to Grand all around generally refer to the old river and not to how special these places are.)

After this, you’ll be driving along the Colorado River Valley the whole time, the road taking you on the East side of the valley, leaving you the views of the Neversummer Mountains (still the coolest name!) the entire time. The left side is full of hiking trails and lakes that you really want to explore when you come back! 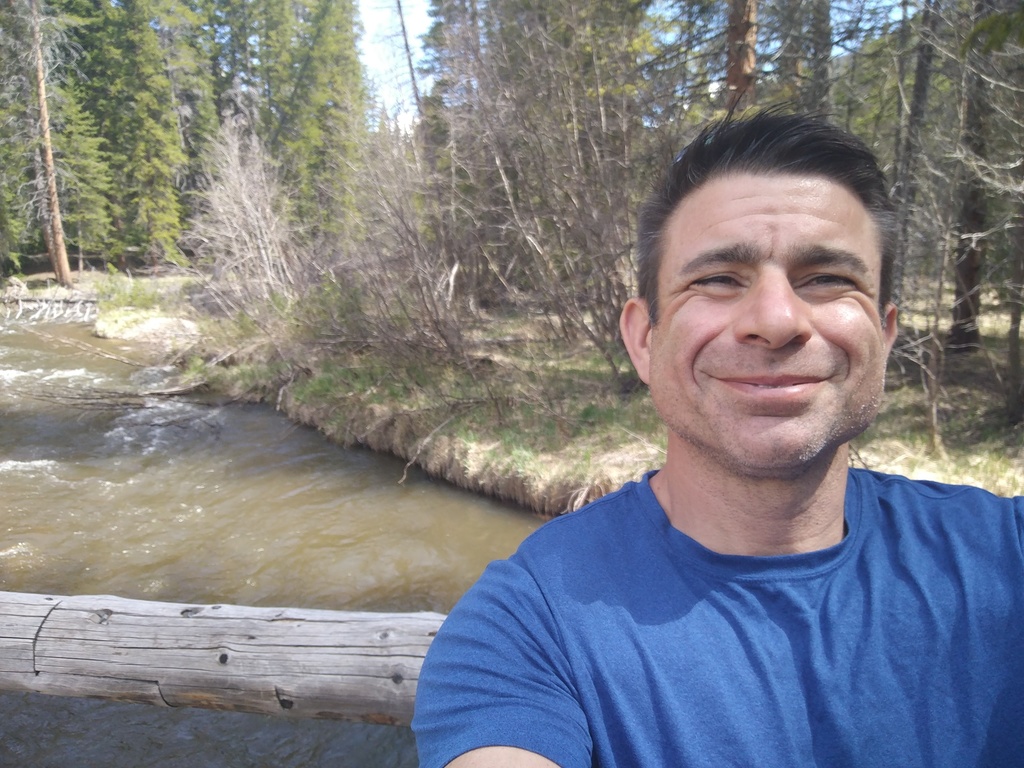 Sadly, at this point you’ll hit the other park entrance and the visitor center there. You can either turn around and return to Estes Park, or (like we did) drive on to the freeway. The visitor center at Grand Lake is really nice, by the way, despite not offering a whole lot of touristy stuff. It has a great relief map with the main sights highlighted and incredibly helpful staff.

Out we were, and driving into the town of Grand Lake. Again, the Grand doesn’t refer to the size of the lake (it’s pretty small) but to the river. Grand Lake is nice but doesn’t quite compare to the scenic wonder that is Estes Park. It’s also much harder to get to from the Front Range Corridor, where most people live in Colorado, so it feels rural and quiet.

After Grand Lake, Granby, and Tabernash you get into Fraser. You’ll notice a sudden change from the rural area. Things get fancier, denser, and look more expensive. That’s because you left the rural area for the wonders of the ski resort: you are about to enter Winter Park, Denver’s Favorite Mountain.

I haven’t skied it yet, on account of having a season pass to (most of) the mountains on I-70, but next season I’m going to stop there. Winter Park is famed for having some wicked tough terrain and is much faster to get to than Breckenridge and Vail, its main competitors.

After Winter Park, the pain. The highway that connects to the interstate freeway, US 40, is full of switchbacks that look nauseating in the summer, just imagine what it must feel like to get here in the winter on a snowy day!

You hit the pass, which used to house a ski resort (now defunct, but famed to have been the first one in the region to have ski lifts, and also the first one to accept snowboarders!) and go down a lot more switchbacks (still not as many as in the National Park) to finally join I-70. Enjoy the drive back and, if you are new to the area, stop in Evergreen.

For those that have never driven this way, just after Evergreen you hit the top of a ridge and beyond you see the Denver basin. It’s an amazing sight: all these mountains surround you in all direction, but you can see that, in the distance, there is an almost infinite plain that stretches from here to the Appalachian Mountains. It’s a fitting sight after a day spent in Rocky Mountain National Park.