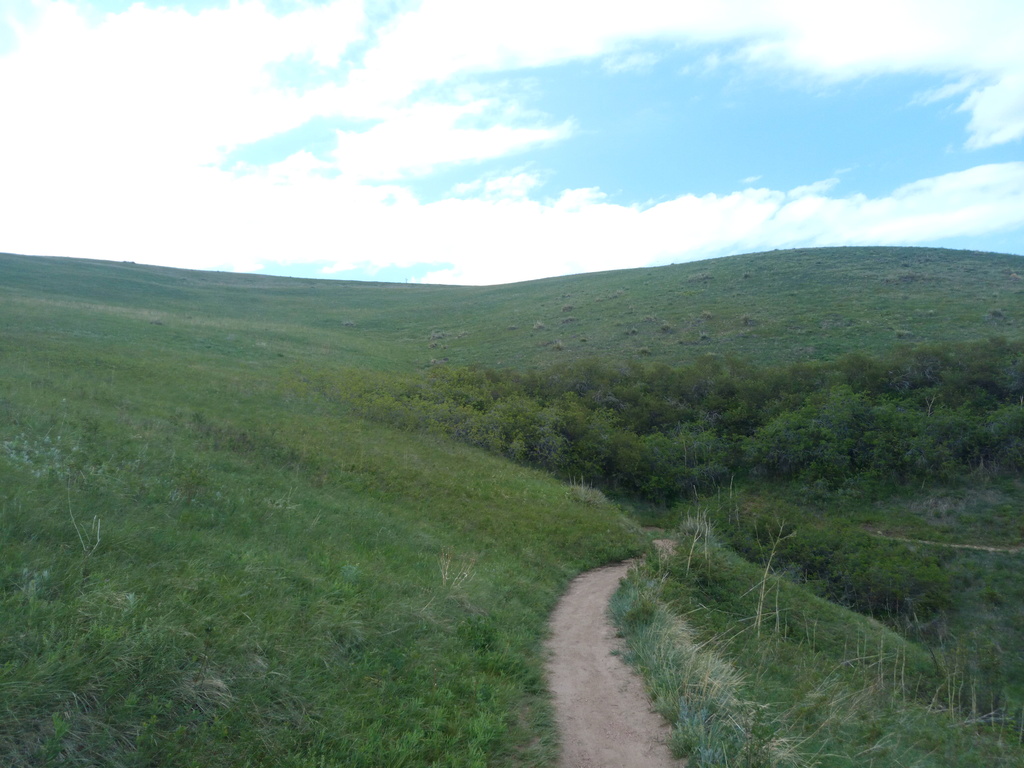 I bought my house in Lakewood in great location. To my West, the mountains in a series of ascending peaks, including the giant tower of Creation Rock in Red Rocks Park. To my South, the beautiful Bear Creek Lake Park (also: a handful to say) with the public beach and water skis on Soda Lake. To my North, of course, the big hulking mesa known as Green Mountain.

It’s been a while I’ve lived here, but I never hiked up Green Mountain. Much of it was simply because it was too cold or snowy, but finally it’s warmed up and it was time to try hit the summit. I packed a protein bar and carried a giant jug of water (you’ll need both) and set out to conquer my first Colorado mountain (that didn’t have a ski lift).

The first pleasant surprise is the trail system. Trails cross the mountain everywhere, they are superbly maintained, and the place is teeming with hikers, bikers, and occasionally horse riders. Google Maps, which I used for orienting, only has a small subset of the trails available, so make sure you get a better map from the City of Lakewood site or at the parking lot.

I am lucky and don’t have to drive at all. I just walk from my front door and I am on the trails nine minutes later. If you have to park, though, there are several pretty spacious lots, that though fill up relatively quickly on a warm weekend. The main entrance is on W Alameda Parkway on the East side, while the quickest way to the top is on the West side, across the mountain from CO 470 (Rooney Road Trailhead).

The mountain itself is pretty big, but hardly qualifies as much more than a hill compared to everything around it. Geologically it is a mesa – what is left of the old ocean floor that once was East Colorado, after everything surrounding it eroded away. Mesas are usually flat on top, but Green Mountain is so old, there is an actual summit. Also, the mountain is much steeper on the West side than on the East side, a little like the Hogback to its West, and for much the same reason: these hills were uplifted on the West side by the growing Rocky Mountains.

There are plenty trails for all kinds of visitors. A flat trail at the bottom (one section of Green Mountain Trail) is excellent for fast runners, while several of the trails going up the mountain are designed for mountain bikers. There is a very wide trail / road that serves as access point for the radio station near the summit (also part of Green Mountain Trail). You can easily horseback there without bothering anyone.

The trail ascends the mountain gradually to reach a midway point until it is joined by a straight spur from Green Mountain Trail far below. It being early June, there were lots of pretty flowers and pollen (make sure you have allergy pills with you, because the pollen count up there can get insane).

Most of the mountain is a pretty, green desert of grasses with barely anything of anything growing. When I hit a small section through brush, I was pretty surprised to see a giant snake resting across the trail. It was about six foot long and 3 inches thick. I looked up the species and it seems to have been a snakus shitinmypantsus. Fortunately, it must have thought I look none too good or smell too bad to eat, so it just slithered away, slowly.

Once the two trails merge, it’s a much steeper uphill to get to the summit. The trail switchbacks when it gets really steep, so it’s doable for anyone with the desire to see what Colorado looks like from up on top. When you see the sign for the paraglider launch site, you are almost there.

When you get close to the top, you are rewarded with spectacular views of the West. The main feature you’ll notice is the Hogback, a long and odd series of hills that goes North-South and runs the line of the entire Denver Basin. Just like Green Mountain, the Hogback was once ocean floor. Then the mountains to the West rose up and carried the West side of the ocean floor with them. While Green Mountain is far enough to the East not to have been tilted much, the Hogback is the result of pretty extreme tilt: the East side of the hills is flat, because that’s what the ocean floor used to be. The floor was raised on one side and washed away. The first layer that was resistant to erosion then became the East side, while the West side eroded away more quickly.

Now we have this series of hills that are interrupted by creeks coming down the mountains, forming the Hogback Gaps. On the section to the West of Green Mountain you’ll find a high concentration of sights. Down farther South, at the big gap, is the town of Morrison, famous for the bikers that rush through every Sunday. Just North of it (and just behind the Hogback) the towers, spires, and tilted slabs of Red Rocks Park. You can see the amphitheater nestled between Ship Rock (left) and Creation Rock (right and taller).

In front of Red Rock and at the foot of the Hogback, you’ll notice a long structure. That’s the Bandimere Speedway, a famous race track that generates infernal noise that is oh-so-tempting when I am relaxing in the hot tub at home. North of there is a road that goes up the Hogback for no apparent reason. That’s actually the road accessing Dinosaur Ridge, another Lakewood landmark (technically in Morrison). You can park your car at the lot at the foot of the hogback and hike up, or take a guided tour, and see beautiful fossils from the time when the Hogback was the ocean floor I mentioned.

Just North of Dino Ridge, another something that looks like fun from a distance (and is even more fun up-close). This one is another racetrack, but this time for dirt bikes: Thunder Valley. It’s too far to see the bikes racing, but you can easily see the concession stands. If you haven’t brought food and drink on the hike with you, you can probably smell both from your vantage point. You will also curse the moment you didn’t listen to my words!

The summit is quite unspectacular. Since it’s a mesa, the top eroded gently and there is just a knob on top that you have to guess is the summit. I think it’s unmarked – just think because I am not entirely sure I stood on the summit, although the trail map and the gaggle of fellow hikers told me something was special about the place.

Green Mountain is one of the few locations from which you can see the three Front Range 14ers. Coloradans are mysteriously obsessed with the mountains above 14,000 feet, many of us compelled to climb (“bag”) all of them. You can buy special “Fourteener” notebooks in which you can record and scrapbook your ascent of all of them. But from this point, you can see the three Easternmost of them.

If you have visited Denver before, you know that the geography of the place is quite remarkable. It marks the Western edge of the Great Plains, just before the Rocky Mountain system starts. From here on West, it’s mountains after mountains until you hit the ocean in California (which is also full of mountains, including the tallest mountain in America South of Alaska).

The Front Range Fourteeners are then special, because they are the first real mountains you see coming from the plains. They are visible from very far away (on the East side) and are the dominant landmarks of their respective cities, who have rivalries going on about whose mountain is the most spectacular.

The tallest of the three and Denver’s mountain is Mount Evans. It rises to your West, snow-capped even late in the season, behind a series of lower mountains. Viewed from Denver, incidentally, you see it as the background to Green Mountain in the foreground, and if you look opposite Denver on the summit of Green, you look straight at Mt. Evans (in case you have problems telling it from the other snow-capped mountains to the North (right), which I call the Ladies’ Mountains on account of the fact two of them are Mount Flora and Mount Eva. Just behind them is the ski resort of Winter Park, a local favorite.

To your left and South, a series of mountains (Hogback, foothills, Front Range) goes straight until it hits a wall. Rising high above (and far behind) that wall is another snow giant, the mountain that rises dramatically above Colorado Springs: Pikes Peak. Pikes is the shortest of the three Front Range Fourteeners, but probably the most dramatic, since it rises so suddenly in front of Colorado Springs. From the town to the summit, the distance is about half what it is from Denver to Mount Evans. Also, Colorado Springs has a feature quite similar to Red Rocks, called Garden of the Gods, which you should definitely visit.

To your North and peeking behind another set of famous mountains, the Flatirons (whose name doesn’t explain itself from this vantage point), the third Front Range Fourteener, Longs Peak. Longs is particularly famous for being the highest peak in Rocky Mountain National Park and is the “spirit mountain” of Boulder. Boulder is an amazingly pretty city which you should also definitely visit, while I will have a separate entry on visiting Rocky Mountain National Park.

(Before some Fourteenerhead sends a deluge of messages, there are three more Fourteeners in the Front Range: Mount Bierstadt, which is just to the West of and shorter than Mount Evans (and hence is invisible from the plains); and the twin mountains of Grays Peak (slightly taller) and Torreys Peak. Both are far from here, near the ski resorts, about an hour away by the main East-West freeway, I 70. Which also marks another distinction of Longs Peak: it is the only Fourteener (out of 53) North of this freeway that connects Denver with the Western part of the state.)

Done with the summit? Chat a little with the other summiters, you’ll meet people from all over the world and locals alike!

Hiking down is possibly more fun than the other way. It certainly goes faster. I started going down Green Mountain Trail, but quickly realized it was probably going to end at the main parking lot – too far North for me. So I went on John Hayden trail, which switchbacks through beautiful meadows. Really, if you remember the old default background of Windows XP, that’s what the whole mountain looks like.

By the time I was down, I was tired. Hayden Trail is a single track and there were bikers going up and down the whole time. Technically, they are supposed to yield to all traffic. In practice, they yell and you jump.

Remember to bring water and a snack. Also, we very frequently get thunderstorms, especially in the afternoon, and you don’t want to be on a desert surface when lightning strikes. Check the weather forecast! Also, the views of the mountains are much, much better in the morning (when the sun shines behind you onto them), while Denver is prettier in the late afternoon.