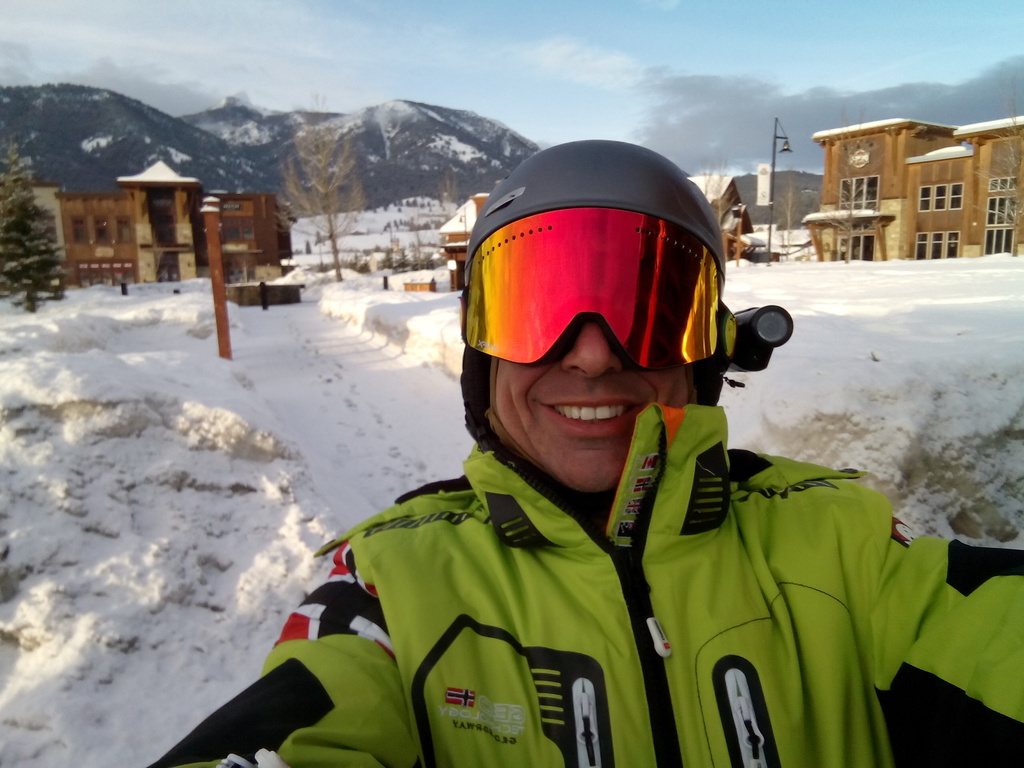 Big Sky is an odd resort. I occupies a wide valley that ascends until it hits a capping mountain, Lone Mountain. There are several villages, each with its own character. The main base area is called Mountain Village, and actually has a whole mountain below itself. There is a village called Moonlight Basin, which is new. There is a Hidden Valley. Just below that one is Town Square. There is a Golf Course. There is a Meadow Village. There is a crossing and a Canyon Village.

Which one is the real village? Not easy to tell. The base of the mountain, where the tickets are sold and the shuttles stop, is Mountain Village. That one has all the infrastructure and the views of Lone Mountain. Town Square is otherwise the town center of sorts, but it has no view whatsoever of the mountain.

In the end, it doesn’t really matter. There is a free shuttle bus that goes up and down the valley at an hourly rhythm. If you can score rooms at Mountain Village, go for it. But any of the villages is fine.

The Rock River Lodge is right by Town Square, that is the commercial center. The hotel is really nice, and the staff really friendly. They charge a bullshit “resort fee” of $15. They seemed to be very embarrassed by it: the receptionist claimed it was a Hotwire charge. When I called her on it, saying that I had stayed at two more Hotwire hotels on this trip, in Sun Valley and Jackson Hole, and that neither had charged me a fee, she said the magic “resort fee” word and I knew better than argue. She continued to claim, though, that the money would go to Hotwire/Expedia, which is absolutely not true.

Frankly, the resort fee is an invention of a marketing person that absolutely wants to be fired. What it does is hide an expense until it’s too late to complain about it. You make your selection based on price and comfort, and when you show up at the front desk (prepaid), they tell you there is an extra fee. At that point, they tell you it’s take it or leave it. You have no option at that point, so you pay it. It’s extortion, plain and simple.

That’s so unethical, I am surprised it’s even legal. That type of mandatory fee should be declared at the time of purchase, if not directly baked into the room price. I do not know whether that’s a fee uniquely charged by the Rock River Inn or if it’s the whole community, like at Squaw. At Squaw (where the charge is $20 per night – I think Mammoth is similar) it irked me so much, I swore I wouldn’t go back, ever.

Aside from that, the Rock River Inn has actual keys, which is a real nuisance when you snowboard. The problem is that the keys easily tear through the snow pants, so that it’s really advisable to leave them at the front desk when you go boarding.

The Internet was really good, which was welcome (especially since my AT&T gizmo didn’t work too well). The breakfast was tragically bad, and the hot tub was covered the entire time I was there. Not very inviting. Also, for some reason there were very loud people walking around at 2:30a both nights. Made me feel right back in Pacific Beach, but there is a good reason why I am leaving this place soon.

The Village was nothing to write home about. The stores clustered around a Town Square, but they were really not too exciting. There was a deli, a liquor store, a few eateries, and boutiques. Also, a bank. I could only hope the mountain was worth it, because the Village most certainly wasn’t…