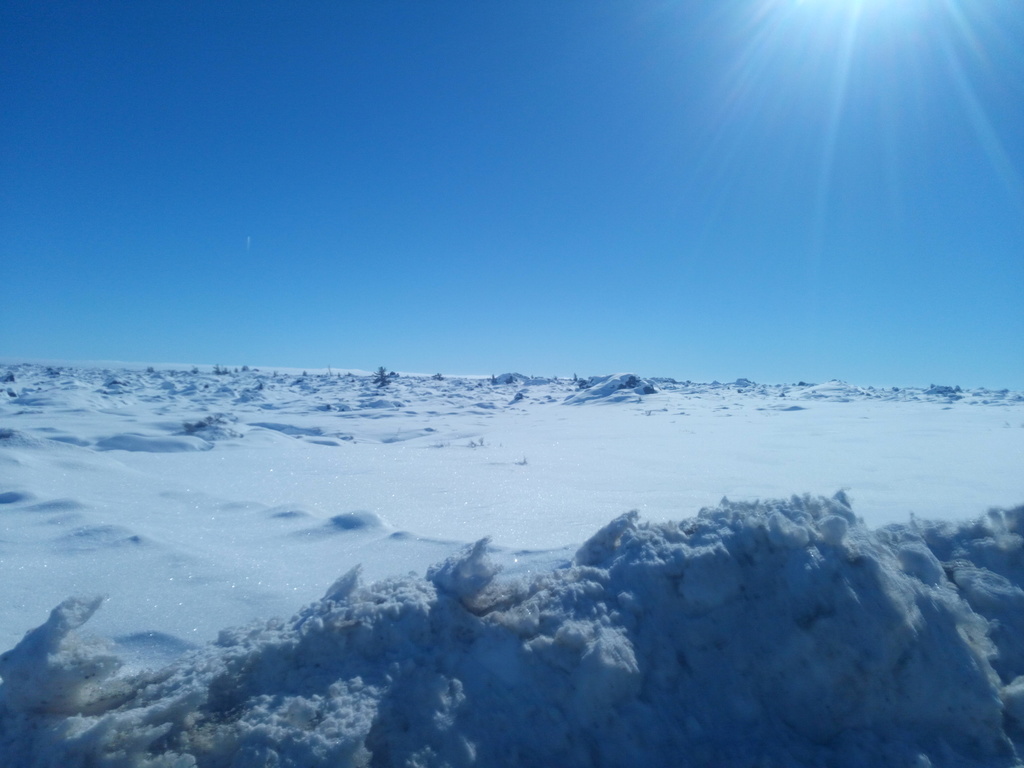 The drive from Sun Valley to Jackson Hole was 4.5 hours planned. Leaving the first resort at closing time would have gotten me into Jackson after 8, which is something I didn’t want, since the last part of the drive involved crossing the Tetons.

I left early (sue me), after lunch. As usual, I had packed the car and checked out, and since the lot was so close to the hotel, I just moved everything to the lot.

I drove through the towns that make the Valley. Then Google said I should take a detour away from the main highway and I did. The rural roads were fine, and a check after the fact revealed that Google had been right.

After a while, I started enjoying the scenery. The hills were covered in a perfect blanket of white glistening like ermine encrusted with diamonds. The sun was shining and the temperatures were strangely high for the time of year, prompting locals to comment.

The shortcut that bypasses the freeway gets through Craters of the Moon National Monument. To anyone from Hawaii, that’s simply a large lava flow that shows off how the whole area is volcanically active. Nothing exciting. Someone who has never seen a lava flow may be interested in this one.

Eventually, a cloud cut a hill in half. As I got closer, it was obvious the cloud was really fog, and from then on I would drive in this thin layer of mist. I could see the sky above, a foggy shade of blue, but it was hard to see anything around me.

Eventually, I got into the Snake River valley. First, there was the Atomic Museum, EBR-1 (closed in winter). Then the town of Idaho Falls. I stopped for gas and got some McDonald’s. For whatever reason, the ladies there stared at me with undisguised “interest,” something that would continue for the remainder of the trip.

From then on, the drive would lead on US 26 to the town of Swan Valley. From there, I would cross a low-lying chain of hills until I hit the town of Victor. After that, the crossing of the Teton that scared me a little. What to do?

The first thing I noticed was the absurd beauty of the endless fields of snow. They went unbroken for miles, only once in a very long while interrupted by a set of Nordic tracks that stretched from one end of the horizon to the other. I could only imagine how long it had taken the enterprising sportsman to cross that expanse, could only smile at the curlicues they had drawn on steeper hillsides where they could just glide down.

The crossing of the Tetons turned out to be dull. You couldn’t really see much of anything, just driving up and then driving down. I got to the town of Wilson, where the highway split to go to Teton Village, and started recognizing places. It was good to be in a familiar environment.