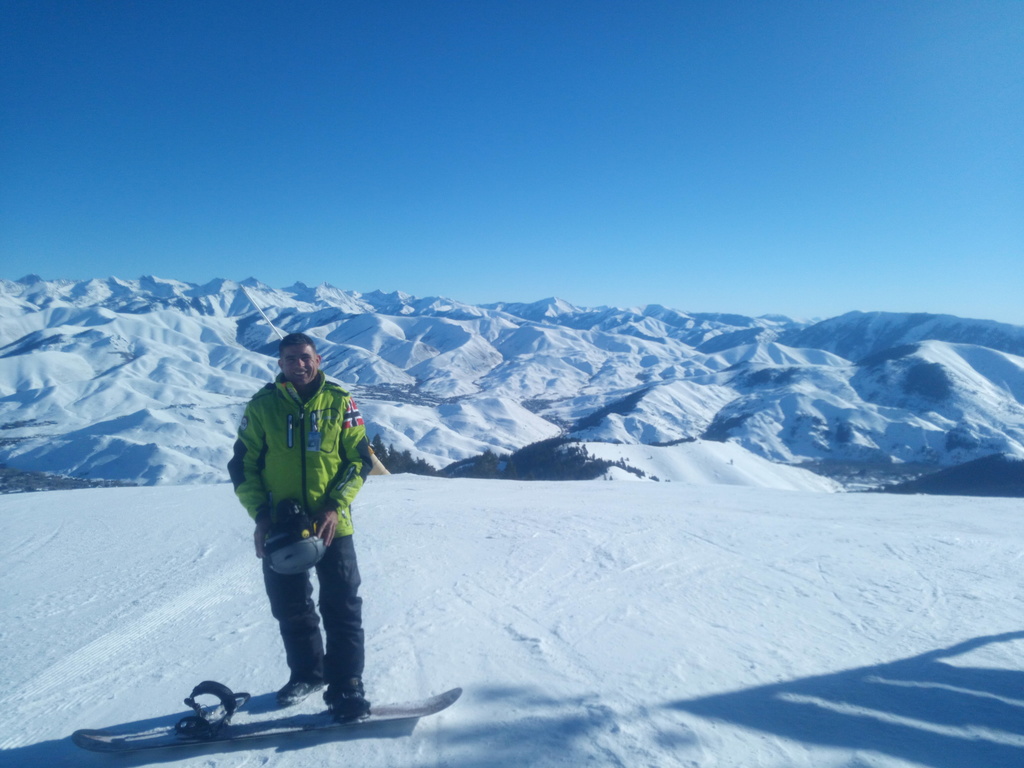 From the hotel to the entrance to River Run Lodge I had a 9 minute walk. In fact, getting from the Lodge to the parking lot was shorter than from the end of the lot to the resort.

Sun Valley is incredibly friendly. It advertises it won “Best of” awards in a number of categories, like speed of the lifts, kid friendliness, etc. None of them are technical wins. There is no, “Best lift” award, or “Most difficult terrain.” Sun Valley wins the heart, not the muscles.

Getting my Mountain Collective Pass was easy, and the guys there were incredibly friendly. The friendliness didn’t stop there: people were polite in the lift line, friendly on the lifts, collegial on the runs. It was the Stepford resort, but in a very good sense: you could snowboard all day and not have a bad experience, something I still have to manage at Mammoth or Heavenly, despite trying for years now.

I won’t lie to you, Sun Valley has two massive problems: the resort is relatively small, and the runs are not very challenging. I completed my tour of the place in a day, and on day 2 I was just repeating the runs again. Not all of that is bad news, though: Sun Valley really has the fastest lifts I’ve ever seen at a resort, and it’s really the place you want to go to if you want to get as much vertical in as you can. On day 1, I managed almost 70,000 feet of vertical. Granted, I was snowboarding non-stop from opening to closing, with not a single stop. Also, the snow was tragically marginal and I couldn’t really leave the groomers, so I was all about speed and not at all about technique.

Sweepers, you ask? Well, there is a whole universe of skiers that sweep the runs from one side to the opposite. They are not predictable when they do that, deciding to change direction seemingly at random. So when you hit a sweeper, you can’t really get around them unless by doubling down on speed (which I am still not comfortable with). The other option is to slow down, wait until they notice you, and then pass.

The mountain has three sides. The main side is accessed from River Run. That is not just the name of the lodge, but also the name of an actual run, a gully that comes down the mountain. When you get it with no sweepers, it’s mad fun. The other side goes down to a place called Warm Springs, easily spotted by the stench of foul eggs at the bottom. I should mention that a great many resort mountains have volcanic activity, like Mammoth, Whistler, Mt. Bachelor, and of course Sun Valley.

The third area is the weirdest one, in that it is a traditionally hikers only area (that is, you access it from a flat ridge). Only that in Sun Valley, they built a horizontal lift serving the bowl. I swear it feels odd to go on a horizontal lift, but it works. The snow, sadly, was not worth the trip.

Another oddity of Sun Valley is that they decided to put all the freestyle parks on the opposite side of the Valley. It’s not a bad idea, for sure: the freestylers have their own area and don’t have to share lifts with alpine skiers and boarders. That’s good all around.

Sadly it also meant that on Day 1, I was pretty much alone as a snowboarder. I saw maybe a dozen snowboarders all day! It wasn’t a problem, as it would have been in Squaw (where you still find skiers that refuse to go on a lift with boarders), but not having other boarders around means that it’s hard to gauge which runs work for snowboarding. Particularly annoying on a day with marginal snow.

Day 2 saw lots more snowboarders – maybe there was an event on the other mountain on Day 1. I also stopped for “mountain food,” which in my case generally means a cup of coffee with hot chocolate, and a serving of chicken tenders with fries. I went to River Run Lodge, which served all that food and a variety of others and was, as usual for the place, super-friendly.

Verdict: a technically non-challenging place, Sun Valley wins for charm and overall pleasantness. Highly recommended if you don’t feel like pushing it, and probably the best place to go with a family or beginners. The mountain is well organized, the lifts are incredibly fast, the village has something for everyone, and you can’t get lost easily. It’s the mountain I would love to love if I didn’t get bored so quickly.

Oh, and the views are just amazing.