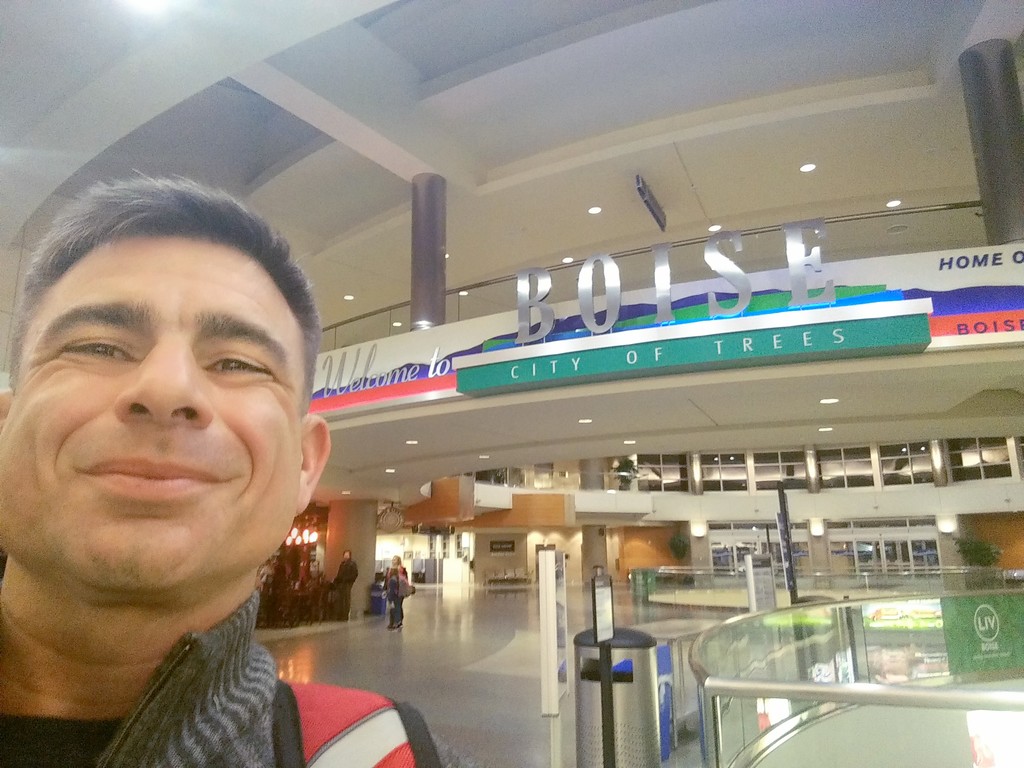 The Alaska flight to Boise leaves San Diego at 3:40p from Terminal 1. It was a Sunday, so the late afternoon was a perfect time to go. What do you know, it was also the first day of a heating trend and I found myself leaving town with the first long stretch of beach weather arriving. It’s been a cold winter, this year, with barely a day making it to average temperature.

I called a Lyft and a ginormous Tahoe showed up. I guess that was very much in keeping with the spirit of the trip, no? We got to the airport in no time, and I had totally overbudgeted time. I got through check-in in no time, thanks to amazing Alaska staff. Then security was not a problem, unlike at Terminal 2. I had nothing to do but browse Facebook and Reddit for hours and realized I really needed to get some games on the phone.

The flight was uneventful. I got sort of lucky and scored a window seat, but I got it on the left side, where the sun was about to set and made watching painful. I still managed to see Mount Shasta, my favorite mountain on the planet (until this trip).

We were somewhat late. At first, they said one hour, but then it ended up being more 30 minutes. We got into Boise, where we actually had to get out of the plane on rolling stairs, like in the ancient days. Then we had to walk a covered but unheated walkway to the terminal. It wasn’t cold, and we were lucky. I can only imagine if it’s below zero and you have to walk for five minutes with the fear your shoes are going to freeze stuck to the floor and you won’t ever be able to leave.

The airport is tiny, compared to the ones I am used to. They also have an amazing setup: rental cars come before baggage claim, so that you can waste time filling out forms while your luggage is placed on the belt. Smart move!

I was with Hertz on this trip, and to my delight they informed me that my car was going to be a Subaru Outback. I could have kissed them: I hate those fleets that are entirely composed of vehicles that are of little appeal to a car buyer, but work well for rentals. Yes, I am talking about you, Nitro, you of the crappy bumper that bends just by looking askance.

The board bag was waiting for me as I showed up. I could tell TSA had gotten busy because they had moved the zipper locks from the end to the middle, doubling my chances that something might fall out.

I got to the car and drove in the dark. I stopped in Mountain Home, where I had to get off the freeway, anyway, and got into the Walmart to buy the items I was missing. From there on, off on highway after highway, until I would get into the valley of the sun. Speed limit: 25.