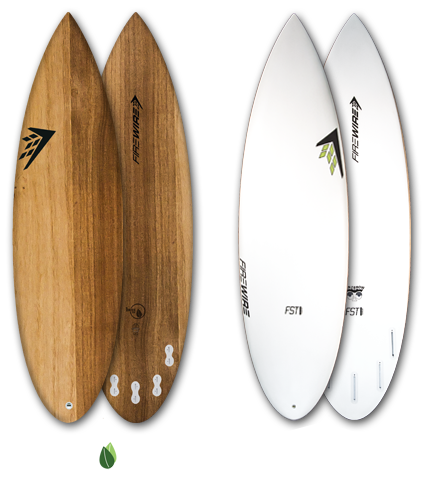 It seems impossible that I’ve had the Unibrow for just two months! It’s grown on me so fast, it feels like we’ve been best buddies for a very long time. So here my impressions of my new BFF in the ocean.

I wrote about the Unibrow briefly when I mentioned Firewire Demo Days. They hold them frequently enough that I got a chance to form an opinion. Not a good one at first: the board is very narrow and it takes a while to get used to it. Because of the form factor, it tends to like some types of waves better than others. Since I couldn’t pick the waves on demo day, my experience with the Unibrow was so-so at best.

Basically, this board underwhelms on small days, where its salient features can’t shine. Also, it feels a bit unstable at first. The combination can be quite toxic, and it took me a while to catch a good wave on the demo days. Granted, I was mostly demoing the Baked Potato (that I then bought) and had to split the remainder of my attention between the Unibrow, the Vanguard, and the Spitfire.

I never did a good demo on the Unibrow, and my guess is that not a lot of people do. Still, every time I tried it out, I liked it more. It felt radically different from the Baked Potato to which I was starting to get used. It was less forgiving, but more precise. If the BP is a micro-aircraft carrier built for small waves, the Unibrow felt like a precision tool meant to dissect large open waves.

I wavered for a long while. As with the BP, the price turned me off: it’s a piece of foam with an epoxy shell, how could it possibly cost $800 bare? But then I realized how much fun I had with the BP, and that I wouldn’t want to go out on overhead days with it. I needed a winter board, and the BP wouldn’t cut it.

The Unibrow is one of the few boards (with the BP and the Spitfire, more recently also the Fish) that Firewire offers in Timbertek. My experience with that material on the BP was terrible: while it was a great conversation piece, the thin layer of epoxy on top of the wood was so thin, it would crumble on its own, no ding required. I spent time and time again fixing all those epoxy holes, where the bare wood would be visible, ready to soak up water.

The new version of Timbertek is much better. It appears to include a layer of fiberglass all around the board, giving it strength and resilience, but adding barely anything in weight.

The other two options are the more conventional FST and the bamboo-decked Rapidfire, which seems to be on its way out. I’ve never been a big fan of the FST, noticing how quickly it turns yellow in the sun. It doesn’t have to mean anything, but I don’t want any chemical changes in my boards under normal use.

Aside from the material, you can pick the fin system. I went with Futures with the BP and was very happy with them: from breaking a fin every few months I went to no fin issues at all. The long gutter of the Futures makes them a lot more hit-tolerant. Of course, my legs have felt the other end of the story: Futures hits on the body can be much harder.

The board comes with a five-fin setup standard.

When sizing your Unibrow, do yourself a favor and go to the sizing app (Volume Calculator) on the Firewire site. Given my parameters, it suggested I get the 6’2″ board. I knew from the Baked Potato that the volume suggested was too big for me. In fact, I was already getting tired of my BP’s size: at 5’5″ it’s 36 liters, and it starts feeling like a mini-aircraft carrier. Looking at the sizes, I went for the 6’0″ and absolutely love it.

I should mention, if you’ve never done the sizing app, that it asks for a series of variables:

That’s mostly for two reasons: the first three parameters mostly indicate how good you are at handling boards; the last one indicates how much support you need. The worse your skill level, for instance, the more you need the board to float independently of what you tell it to do with your feet. On the other hand, someone that weighs 200 lbs needs a lot more board to stay afloat than a 150 lbs twig.

I went to the local shop and ordered a 6’0″ Unibrow in Timbertek with Futures fins. Apparently, Firewire isn’t selling as many of the Timbertek models as they’d like: when I told the sales associate that I would go for either Rapidfire or Timbertek, he called within a few hours to tell me that I could have the Timbertek version right away! In addition to the improvement in the material, Firewire also got rid of the absurd $50 surcharge on the Timbertek. All models now cost the same.

Of course, pushing Timbertek was something I experienced with the BP. I wasn’t happy about the repeat, since I didn’t want the same type of issues as with the old board. When it arrived, though, the new coating made it look a lot stronger. My first day with the BP was marred when the cat jumped on it, sending it to the floor from a stool (12 inches high) and causing a ding on the bottom. The Unibrow looks like you could drop it from even higher places without any issues.

A moment of disappointment came when I tried to insert the Futures fins. Again, those are fancy pieces of plastic. There is no reason on the planet they should cost way over $100 – no matter how much you pretend they are engineered with wave science in mind.

The fact is, one of the fins didn’t fit into the fin box. When I compared the sizes, it turns out that the bottom rail was at least 2 mm longer than it should have been. It’s not the end of the world, and a quick trim with the sander fixed it. But, really? $100 for five pieces of plastic, and you can’t even do quality control?

Some things about the Unibrow I knew, and some were unexpected. The first surprise was on the paddle-out: this board is zippy! A combination of the narrow deck (that allows paddling close to center) and of streamlined profile allow you to propel forward easily. Duck diving is really good, too: the board is not very buoyant and doesn’t offer a lot of surface exposed beyond your body, so it isn’t easily torn out of your hands.

I was expecting that after a year of almost exclusive Baked Potato use, I would feel uncomfortable at first on such a different board. But nothing about the Unibrow felt unnatural. Sitting in the lineup was not an issue, nor was paddling around. I did notice I had to sit forward a lot more than on the BP, but that was not unexpected.

Paddling into a wave is much harder than with a Baked Potato. Part of it is simply that the board is considerably longer, which makes it less responsive to pitch changes. Until I got the right placement on the board and the right attitude, I’d stall or pearl way too frequently.

Once that was squared out, though, the ride was amazing. The Unibrow is designed with performance in mind. It’s not one of the high-performance boards in the Firewire lineup, but it comes relatively close. You notice it as soon as you stand on it, when it reacts to your every move, seems to read your intention, and follows through with joy.

The first wave I caught was at Torrey Pines Rivermouth on a relatively large day. To give you an idea of what that looks like, imagine a beach break backed by a giant wall – the causeway – that reflects all waves back. 6-7 foot waves crashing at high tide, mostly closeouts you’d have to shoot along to ride any meaningful length.

I was really not comfortable riding a brand new board in those conditions, but it was too big and fast a day for the BP, and I didn’t want to wait any longer, anyway. Finally, I found a wave that seemed suitable: it came at a slight angle, so it wouldn’t close out as badly as most; it was very smooth; and I was in the right position to catch it, with nobody around.

When I got into the wave and stood up, the Unibrow felt natural. More than just that, it allowed me to turn on a dime. As the wave neared the breaking point I shot down an impossibly steep face into a bottom turn that seemed without exit. But I had charged fast enough that I could see a way out. I drove my foot into the board and pushed as hard as I could and the Unibrow listened. An elegant turn with an ever slightly accelerating curve, then a counter-turn, a sigh of relief, and I was firmly lodged on the upper half of the barrelling wave.

I was surprised again, at how easily the Unibrow transitioned from rail to rail. I could fly up the wave, and then gain speed to pass an unsightly section at the bottom. I could ride out a bump by spinning around it, instead of plowing through and hoping for the best. This random first wave ended up being my BLE, by Best Left Ever.

Again, a few things continue surprising me. The first one is that while I rode the BP without a traction pad, I don’t really like doing that on the Unibrow thanks to the added length causing a wider stance. Incidentally, Amazon has these really nice pads made in San Francisco, the company is called Punt Surf.

Another surprise is the new resilience of the improved Timbertek. The board absolutely looks brand new even after two months of heavy riding (I hope Craigslist won’t read this if I ever have to sell). Considering how much time I had to spend simply waterproofing the BP, I am relieved. The board gets its share of compliment on looks, just like the BP.

Finally, I am floored that experience makes (me on the) the Unibrow so much better than the demos would have indicated. This is really a board that wants to be experienced, not just tested.

There is a simple rule in my garage these days: if the forecast is above 3 feet, the Unibrow gets into the trunk. Once I got used to it, I made this board my go-to piece of equipment for anything not embarrassingly small. It’s fun to paddle, even more fun to ride, and it absolutely never lets me down.

The Unibrow shines on large beach break surf, where you need speed and maneuvrability. It does extremely well on any kind of reef break, where the ability to turn fast is oh-so-important. While it’s most fun to ride in smooth surfing conditions, it does handle backwash and bump better than expected. (Certainly better than the outlandishly confused BP.)

On the other hand, it’s definitely not the board for small surf, where its advantages don’t bring anything to the table, while the narrow tail becomes unresponsive and dull.

I’ve been riding the Unibrow mostly as a quad, but it behaves equally well as a thruster. Obviously, the bigger the surf, the more I’d rather have the thruster. I guess the two statements together tell you the surf has been a little disappointing this winter…