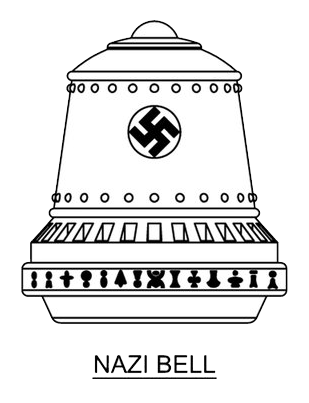 Research for the new novel is almost completed. There are going to be twists and turns that will make a helicopter spin, and I decided to keep with the strength of In the Mission: a novel about a deep mystery wrapped in a conundrum, where science parallels art which parallels the otherworldly.

Somewhere in the depth of the research (and it goes very deep), I found myself mired in a strange story. It was originally reported in the year 2000. Given that it was about something in the Nazi period, it seemed very odd we could still unearth something of fundamental importance 50 years after the fact.

But people gobbled it up. By “people,” I mean UFO researchers, science fiction authors, and alternate reality scientists. Unsurprisingly, the story made its way into Ancient Aliens, the show that consistently rivals Fox News for the most outlandish interpretation possible of actual things.

This is about Die Glocke, or “The Bell.” A device whose function seems to have been lost in time. The secrecy surrounding it was so total that the only evidence of it is the report in the book, The Truth about the Wunderwaffe. In fact, there is no hard evidence of this bell at all. All we have is what the author says in his book.

The Wikipedia page on the matter is a little vague; the crackpot sites with blinking GIFs are full of outlandishness. But as soon as I read the description of the thing, I had a theory fully formed in my mind. It seemed so self-evident that I wondered why nobody mentioned it. But of course it was too self-evident for a world more interested in outlandishness.

So I bit the bullet and bought the book. It arrived today, and I started perusing. The Truth is fairly long, the English version a little too close to the Polish original, making it sometimes closer to a Google Translate rendition than an actual translation. While the writing, for that reason, sounds a little off, the research is spectacular. The author spent a ton of time putting together data on the Wunderwaffe project, and the tome is evidence of effort and care, as well as skill and acuity.

Wunderwaffe is German for “wonder weapon” or, more precisely, “miracle weapon.” Basically, once it was starting to become clear that the war was not going well, the Germans grew increasingly desperate and started wishing they had a miracle weapon that would turn the war around. They were not the only ones: America’s atomic bomb had that effect on the war in the Pacific.

Wunderwaffe is of course a type designation. Any weapon we’d call disruptive can be a miracle weapon. As such, the designation moved from one newfangled thing to the next, always abandoning something that hadn’t worked. For instance, the V1 and V2 rockets were supposed to be Wunderwaffen. When they failed to have the intended effect of subjugating the British Empire, they became just Waffen and something else had to become the Wunder.

This particular Wunderwaffe had no name. It was described in a document in the vaguest of terms, because the person writing was a soldier and had no idea what the thing was meant for and how it worked. The description, then, is very matter-of-factly: a tall cylinder (about 1.5 m wide and 2.5 m tall), standing on a metal pedestal that was slightly wider than the cylinder, giving it a flared appearance (from which it got the moniker, “The Bell”).

Inside, there were two counter-rotating metal drums or cylinders. At their center was a tall metal container. When the Bell was working, a liquid in a container would be placed inside. The liquid was metallic and would glow purple when the machine was turned on. The cylinder was also topped off with a lid that had a housing for a very thick power cable.

The experiments done are vague, as well. We know that there were levitation experiments, leading some to speculate the bell was an anti-gravity device. That of course immediately fed into UFO-mania, and suddenly people started thinking the bell was the power source for Nazi UFOs, replacing aliens (and Nazis seem to be cooler than aliens in some minds).

There is mention of very strong magnetic fields, and interference with the power grid (dimming lights) when the machine was functioning. Also, the first people (scientists included) that worked around the bell seem to have been affected by some kind of radiation poisoning. The experimenters figured out a safe perimeter and uniforms that kept the radiation at bay.

Finally, two things stand out: the Glocke is never mentioned (according to the author) as a weapon in itself, despite the lethal effects it had; and the transformation from mercury into gold is mentioned.

The author seems to be getting confused. Oddly, he gets almost all the way to my theory, but doesn’t make the final step. Which I find very surprising, because i got there before even having all the other information he lists in the book (the parts about cooling, strong magnetic fields, and atomic conversions, in particular).

The idea is that the secret substance found by the Nazis was a high-temperature superconductor. Mercury is a really good candidate, since it’s the material in which superconductivity was first discovered (in 1911). It stands to reason that the Nazis might have experimented with mercury in conjunction with superconductivity.

Once you have a superconductor, what do you do with it? Well, you feed large electric currents into it and make them spin. Because it’s a superconductor, those currents will flow forever-ish. And what does a current do when it flows?

Yes, yes. Humans, like almost all animals, are essentially water with special sauce. Water is diamagnetic, which means it’s a substance that tries to get out of magnetic fields. So if you place water into a very strong magnetic field that is just right, it will start moving out of it – levitating.

Of course, there isn’t a whole lot that a magnetic field is good for. It certainly doesn’t make for a good miracle weapon that could turn the war around. But finding a high-temperature superconductor and the resulting magnetic fields would have sent any scientist into a miracle quest. It’s just too tempting to play with the possibility.

One of the things you might have done is create a rapidly changing magnetic field. That’s because that way you can create a containment field for charged particles. The principle is used in a variety of places nowadays. For instance, if you have heard of particle accelerators, they use superconductor magnets to bend a beam of charged particles.

A very promising application of these rapidly changing magnetic fields – so promising in fact it has remained a promise for half a century – is the use of containment fields to generate pressure on ions. The basic idea is that you take a bunch of atoms and strip them of their electrons. That way, they are charged (positively) and will follow the guidance of a magnetic field.

OK, so the stuff you generated without electrons is called a plasma. What happens if you generate enough pressure in the plasma? The resistance of the protons (the positively charged particles in the atom) will eventually break down and some of them will fuse into larger atoms (nuclei, to be accurate).

And here is the deal: when they do that, the resulting nucleus weighs a little less than the sum of the two prior nuclei. E equalling mc squared, this means that a ton of energy is released. A metric truck load of energy.

All sorts of things happen when you release metric truck loads of energy. For one, radiation is released. How much radiation, you ask? Enough to kill anyone close enough to the bell. Oops, that’s exactly what happened. Why does the radiation work only for a short distance? Because when it hits matter (including air) it transfers its energy to the matter. Which typically results in a glow in the higher energy levels. A blue glow. And guess what was reported from the bell? That’s right. A blue glow.

If the radiation energy is just right, you would notice some side effects that are strange. For instance, nuclei of substances surrounding the site might be bombarded by electrons, protons, neutrons, or other nuclei. When such radiation hits, it may change the entire nucleus. If you turn a proton in a mercury atom into a neutron, you automatically get gold. Guess what was found in the mercury originally used for the experiment? Traces of gold, not present before the experiment.

Other stories about the experiment fit this description to a tee. The bell would have required precisely the setup described to function as a fusion concentrator – the name we use now is tokamak. The amounts of radiation emitted would have caused the consequences found. Also, the bell would have been an energy generator, not a weapon: the radiation it emits cannot be easily weaponized, but the amounts of energy generated are so enormous, any application becomes conceivable.

In the end, the bell may have disappeared simply because there was no short-term way to use it. While gas was in short supply in Germany at the end of the war, there was no practical way to use the bell’s unlimited energy supply to power tanks, cars, and airplanes. You could have powered factories, but the Allies were doing an amazing job at destroying those.

So, maybe there really was something like Die Glocke. Instead of being a complicated, complex device with mysterious properties, it may have simply been the first working fusion reactor, based on superconductivity. That would have been way ahead of its time, but in a way that is more prescient than magical.

The Nazis certainly would have known all the pieces required. If they actually found a superconducting substance that works at relatively high temperatures, the Bell is what they would have reasonably created with it. The experiment would have been at a pretty early stage, since the description mentions no output aside from radiation. To make a fusion reactor work, you’d need to capture the energy generated (typically using a set of turbines). Because fusion is so enormously efficient, you wouldn’t need a supply of fuel – once you set it, you can go for a while.

The lack of thermal output also indicates that they couldn’t have gotten very far in their experimentation for a different reason: the reaction generates enormous amounts of energy, including heat. That heat needs to be safely moved somewhere using some form of cooling. The description mentions liquid oxygen and nitrogen, but no supply to the bell.

Since there was no steady supply, the liquids would have gotten warmer after a short while, eventually reaching the critical point of the superconductor. Once that stops superconducting, suddenly you have to deal with an instant decay of the currents flowing through the drums. This would likely result in damage of the superconducting matrix, certainly in an instant crash of the containment field, resulting in immediate release of high-pressure and high-energy protons, deuterons, and possibly helium nuclei (alpha particles).

Summarizing: the setup described in The Truth about the Wunderwaffe is most likely to be a prototype fusion reactor, never brought to a stage more advanced than achievement of fusion itself.

Comments on Wikipedia and the book indicate there is speculation about what happened to the Wunderwaffe after the war. Some say it went into hiding to South America. Others argue it was transferred to (North) America, where it disappeared.

Interestingly, we have a name for the superconductor used in Die Glocke, and another theory to go with it. But that’s a story for a different blog post, and good enough for the novel.