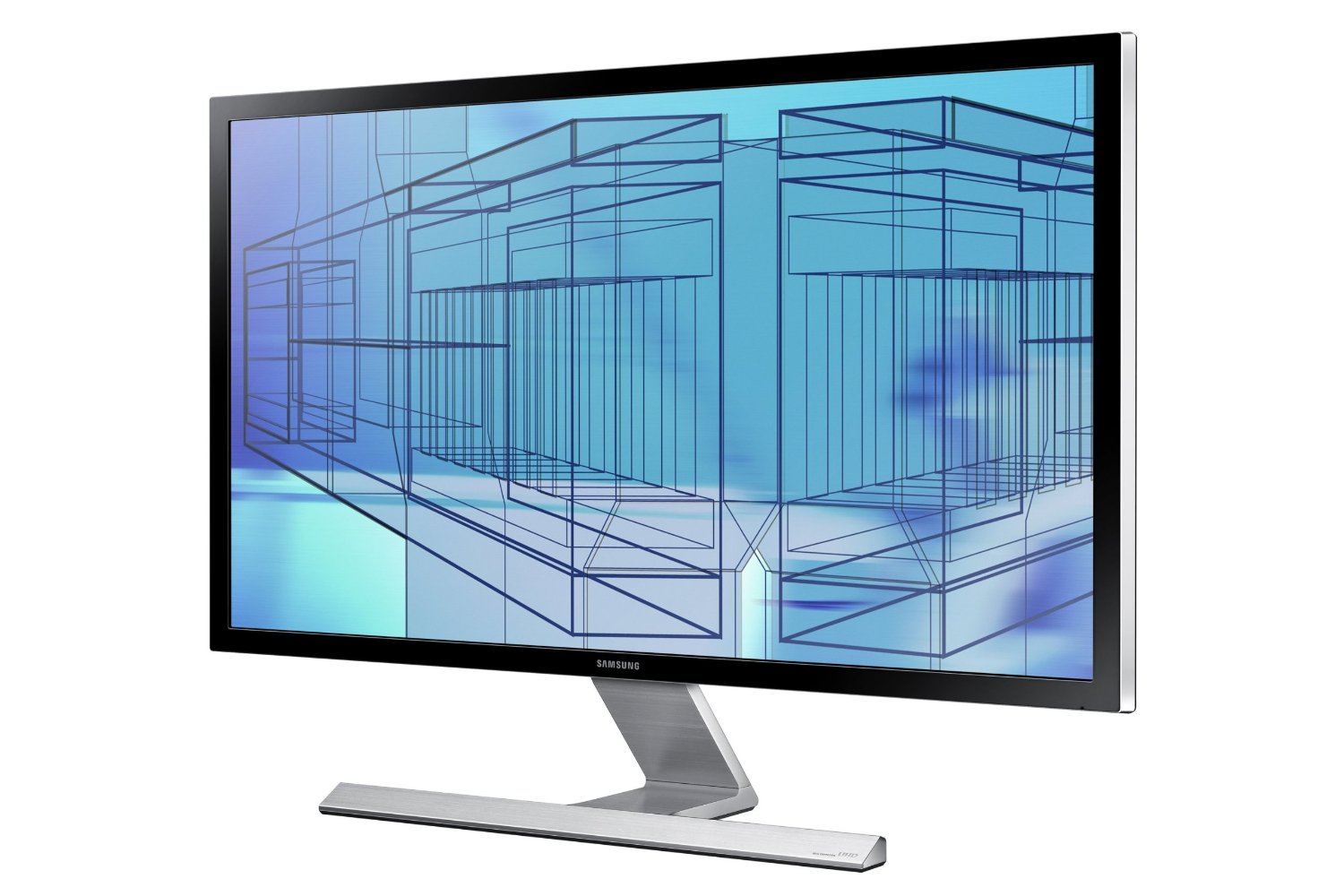 I confess I had an itch. Even in my dual monitor setup, I never seemed to have enough visual real estate. If I had the Android development UI full screen on one side and the emulator on the other, it took only a single konsole shell to fill up everything I had. Then I was left without space for instant messaging, writing, emailing, etc.

It’s common year 2014. There are 10 inch tablets with 2560×1600 resolution (Google’s Nexus 10 and Amazon’s Kindle Fire HDX 8.9″). Why shouldn’t there be a monitor with a resolution higher than that? I mean, what’s the point of having a 30 inch screen if it displays exactly as many pixels as your 10 inch tablet?

There was a deal. While early 4k TVs were freaky expensive (in the tens out thousands of dollars!), Samsung had a relative steal available for $799. Then the price went down to $699. Then one day Amazon had a sale, and it was available for $599. I took it immediately, not asking any questions.

When the monitor arrived, it was a mixed bag. The bezel is small, so there is just a ton of screen. Also, the monitor comes both with two HDMI ports and one DisplayPort. Tons of connectivity.

First the assembly. To my horror, the stand on which the monitor rests is fixed, which means that you can’t change the inclination from perfectly straight up. That’s a bit of a bummer, because the screen is so large, you’d want it to tilt a little.

Next was the simplest question: how do you turn this thing ON? I had the hardest time and was shocked into believing I’d actually have to read the manual. Then I figured it out! (I read the manual.) There is a single button, and it’s on the back of the panel. Bottom right, nowhere near the bezel. A simple sticker on the monitor would have clued me in, but apparently Samsung would rather risk people sending the monitor back as defective.

When I turned on the monitor, it worked really well on both HDMI and DP. I got to try both, because neither of them would give me the full resolution. Instead, the monitor would complain that the best resolution was 3000-odd times something, but the control panel (System Settings on Kubuntu) wouldn’t allow me to change that to anything higher than 1920×1080, which is 1080p.

Apparently, the on-board graphics card didn’t support more than that, or the slightly higher 2560×1600 that Amazon packs into an 8.9″ tablet. I figured a better card would do the trick and asked the Oracle – I mean Amazon! – to ship me the best-seller.

Sadly, the desktop was too small for the card, which was about twice as wide and fit a standard desktop case. Mine was slim. Unfortunately, even if I had tried to make it work, the ports were all covered by the case.

I sent a message to the vendor of the desktop, AA Computers. They are the most amazing guys, creating a product that’s both great technology and amazing price. Also, they are the best people I could imagine for customer service, so I was confident they would help me.

And they did. I got a reply so fast, they must be reading messages in a time machine. I had to order a different model, and they provided me with the link on Amazon. Two days later, the new card landed with usual Amazon punctuality, and I put it into the computer.

Everything secured in place, I checked the BIOS settings, which guaranteed that the new card would have precedence over the on-board chip. Then I booted up, fearing for the worst. Lo and behold, everything worked fine. The second monitor (1080p) came up with the main, both of them went into the Kubuntu login screen, wonderful!

Except the resolution: It was still stuck at 1920×1080. But as the system booted up KDE, a little icon on the task bar told me there were “Proprietary Drivers” available from the manufacturer. What do you know, I clicked on the icon and a control module showed up, telling me I could download the latest NVIDIA drivers for the card.

I said yes, and the module went about its business, downloading and installing. Meanwhile I reconfigured the monitors (they were switched in location). Fortunately, after some really atrocious versions, the new multi-screen setup applet in KDE is really amazing. I just dragged one screen to the right, the other one to the left, and everything was in perfect order.

By that time, the download and installation had completed. I was asked which driver I wanted: The NVIDIA one, which version of it, or the old Xorg driver?

I was really apprehensive. Maybe, I thought, I’ll end up with a system that won’t boot into graphical mode at all. Maybe the screen will look unusable. Maybe I won’t be able to set the new resolution…

I wrote down everything, in case I had to back something out. Then I restarted.

The system booted up fine. Then I went into the control module (System Settings > Display and Monitor > Display Configuration). There I told the applet to give me the highest resolution possible: 3840×2160. Apply. Pray.

Not only that: the new screen is absolutely magnificent. The display is incredibly crisp, so much so that I can type at the same font size as on the 1080p monitor that was barely smaller (28 v. 22 inches).

Downsides so far: the graphics drivers are slightly slowing down the system, especially file access. Whenever I open up a file selector, it’s noticeably slow. That could be KDE, or it could be NVIDIA, or Kubuntu. I don’t know. It’s a little annoying. But not really.

So far, I’ve had no problems with stability. There have been reports of hanging and crashes – I’ve experienced none of that. I have done some intensive graphics/video editing, so it’s not like the monitor, card, driver, computer combination hasn’t had a beating.

All in all, considering 4k monitor support is strangely something that was just announced on OS X, I give Kubuntu and the combination of monitor and graphics card an A+++++ rating. It is flawless in both function and installation!

Fun Fact in Closing: I left the box of the monitor at one side of the office, in testament to how little I believed this wedding would work out. When I looked at the box, I noticed the monitor had a satellite image superimpressed. I looked askance (it was upside down) and it looked familiar. I looked again. And again.

It was Rome! It was an image of downtown Rome, and I could tell upside down from 6 feet away! I went closer and then I could make out all the landmarks: the Tiber, Saint Peter’s, the Tiber Island, etc.