My annual pilgrimage to Hilo used to be fueled by a Verizon 4G MiFi. But it made really no sense to have a $50 a month plan that I’d use only in emergencies and when I was on the islands. So I gave that up and have been looking for a replacement.

When I landed, I had a plan. My primary connection would be the hotel Internet, augmented by the T-Mobile connection on the Nexus 5. Android KitKat has mobile hotspot built-in, and things would have worked swell b 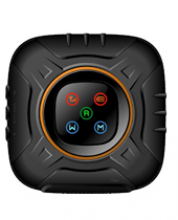 oth at the hotel and on the go.

Turns out the Internet at the hotel (the Wild Ginger Inn) is incredibly flaky. Every ten minutes or so, the connection resets and it takes a while to renegotiate. The phone turns out to be no better, as Hilo is served by the T-Mobile EDGE network and not the zippy LTE. To make things worse, when I tried to use the phone in mobile hotspot mode at the (LTE-enabled) Honolulu airport, the provisioning page refused to load.

When I drove to Walmart to buy the usual necessities you can’t take with you on the plane (like the oh-so-dangerous terrorist mouthwash, or the frighteningly terrorist toothpaste), I stopped at their Electronics department, and they had this device for sale. It promised Verizon network with Walmart prices. Nice! (They also had a 4G Verizon prepaid, but that one requires a subscription).

The economics of the device are simple. You buy the gadget for $80. Then, when you need Internet, you buy data by the GB. 1GB sets you back $15, 2 is $25, etc. You have to use up the data within a specified time limit (up to 2G in 30 days, above that in 60 days), but you can buy as much as you like – and as little. If you don’t use the thing, you just don’t buy gigabytes and you are good. Your only long-term investment is in the device.

Sadly, provisioning was a real pain. I unpacked and charged, and was surprised to find tons of manuals in the box. After all, all I needed to do was connect to the thing, tell it the PIN on the card I bought, and off I should have been able to go.

Not so. The device comes with an unsecured connection (nice). But it’s just a brick at first. I connected to the WiFi network it broadcast, no problem. But it wouldn’t allow me to do anything after that.

Turns out you have to separately connect to the straighttalk.com web site, where you have to do the provisioning. Once you have completed that, you can connect to the admin interface on the device, press a button, and the thing provisions itself once more, reboots, and you are ready to go.

What’s terrible about it is that it’s not really explained in the many manuals and quick start guides you get. You have to get there through guess work, which is really annoying. In particular, it’s incredibly dumb you can’t do the provisioning from the device, since that would be the perfect chance to figure out if it can actually connect to the network.

The connection is decent, and nothing more. Latency is surprisingly low, but it sometimes takes forever to finish a download. You’ll get half an image for a minute, and then the rest will suddenly load. It’s odd.

Of course, I am spoiled by LTE speeds, now. And that’s one thing you should remember: no matter how fast Verizon or StraightTalk is going to become, this puck is always going to be 3G. So, it’s good for an emergency situation, but don’t plan on this being your primary Internet!