The downside: here in two images.

The price on both is fluctuating, currently $250 for the Chromebook and $300 for the Satellite. I guess on an 11.6″ Chromebook that resolution is acceptable, but I imagine you can see the pixels on the 15.6″ as little ponds on the screen.

Next is the best selling high-density screen:

Sadly, it belongs into a completely different universe:

It’s the MacBook Pro. Of course, the price is more justified if you consider everything else you get with a MacBook Pro.

But then we have this little pearl: 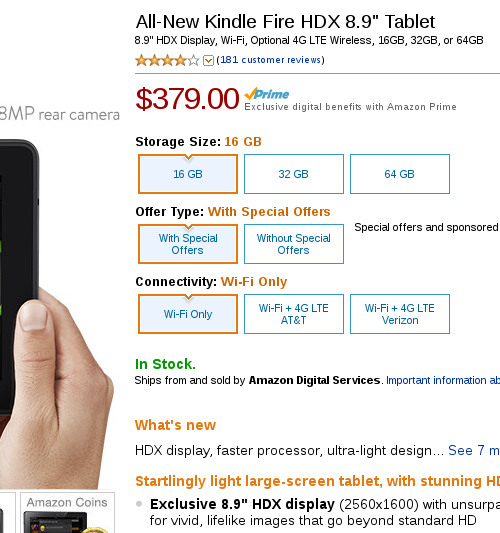 So you can have a high-resolution display on an 8.9″ screen for a little more than you get from a Chromebook.

There is no single thing you will use more on a laptop than the screen. If you do any actual work, or if you just like browsing around, you should not buy a laptop with a crappy, 1366×768 display. Enough said.

If you are confused about the changes to the filibuster rules in the United States Senate, read on!

Hooray! There is something new to explain! You have all heard about this Nuclear Option that Senate Majority Leader (Democratic) Harry Reid pushed through, and you don’t understand what it’s about, what’s going on, and why it’s a big deal.

I am not a Constitutional expert by any means, but I’ve been following this for a long time and here is my (potentially totally misleading and confusing) recap:

What Is the United States Senate?

OK, I’ll start at the basics. The United States Constitution provides for a bicameral system. There is a “lower” house, which is called House of Representatives. Its members represents geographical districts with roughly equal population, such that its composition is more or less representative of the general voting populace.

The “upper” house is called the Senate. It is composed of two members per State, called senators. While the two houses are completely different in composition, they have roughly equal powers. The only real difference is that the lower house (or just, the House) has exclusive rights to start fiscal legislation, and the upper house (or, the Senate) theoretically advises the President and his/her Administration.

This advising function ends up meaning that the Senate is required to confirm many of the President’s choices. This includes treaties, but also nominations to important functions in government (including the cabinet) and Federal Court appointments, including the Supreme Court.

What Is the Filibuster?

The senators bring forth motions and bills to the floor. These are discussed as long as required. When the senators are satisfied that the discussion is completed, they vote to end discussion and proceed with a vote. The procedural motion to close discussion is called “cloture.”