Skip to content
HomeUncategorisedSurfing Banyans on a Costco Foamie 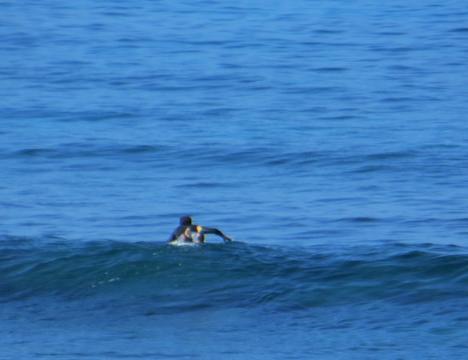 My older brother came to visit with his kids for the first time ever, and they decided to see as much as they possibly could in two weeks. The trip included San Diego, San Francisco, Los Angeles, and the high point Hawaii.

Now you’d think it’s a long trip, even from the West Coast. But Hawaii they had been dreaming, and it was just 5 hours away – compared to the 20 hours they would have had to fly from Europe. I thought it doable, and the kids had been dreaming “their entire life” (which is not significantly longer than the life span of a fruit fly, bless their young hearts).

We booked independently, since we were in a rush, and I ended up at my former favorite hotel, the Castle Kona Bali Kai. I splurged this time, since I was staying only two nights, and got a one bedroom oceanfront suite. From there, you can see the break and decide at a whim it’s time to get into the water. I also have a Costco card, and since there is a store in Kona (not in Hilo, for whatever reason), I stopped and got a foamie instead of renting. It would have come out to about the same!

Costco sells two foamies, both made by CBC, which stands for California Board Company. With a name as inspired as that, you’d think they are as unintelligent when it comes to board design. You’d be wrong.

First, Costco’s prices are amazing. CBC makes two boards: an 8′ soft top called the Waverider, which comes in various deck designs (currently a mostly white one and a blue-striped one). It is aimed at beginners and shows up at every surf break in any place that has surfboards.

The other board is a 5’8″ soft top called the Sushi. It comes in a fish scale design and is rarely seen at breaks. Which is a shame, because it’s actually a pretty good board in a pinch.

Prices, we were talking prices. The longboard is a cool $99, which is a minuscule fraction of the price of even an old beat-up longboard (and about half the price you’d pay for the same board in a store). The shortie, on the other hand, is a whimsy $59, which is really cheap. As mentioned, it was cheaper for me to buy one for three days than to rent one for the same period of time!

When I picked up my Sushi, my first worry was that it would require tools for assembly. I mean, every shortboarder in the world probably has had the moment when they needed the stupid hex wrench for the fins and it’s nowhere in sight. (Tip: one inch of duct tape and you can affix it to the bottom of your board, near the fins.)

What do you know, the screws that hold the fins in place go through the board. They are big and flat, and you can tighten them with a quarter in a pinch. But you don’t have to, since CBC added a nifty keychain with tightening disc (quarter-sized). That alone already told me the good people at CBC had thought this through.

The leash is included, and looks and behaves like a regular leash, complete with emergency disconnect and triple velcro. I wonder if they did that for the looks of it, or because there were ready-made leashes available, since you are highly unlikely to use this leash on anything but this particular board.

The board is, as mentioned, soft on top. The deck is textured and you don’t need wax for your feet to catch a grip. The shape is rather flat with no rocker, but given the nature of the beast you wouldn’t want to ride it in waves that scream for curves.

Banyans. Paddling out there is a bit of a bitch, since the reef is shallow and the tides make and unmake channels. I spent a good ten minutes trying to figure out how to get in without getting my feet torn up by sea urchins, and I still managed to bang a fin on a rock. Fortunately, this is the Costco Foamie, so I didn’t really care.

When I got out in mostly flat surf, I noticed the first problem: while the deck is rough enough for your feet to grip on, the same is not true for a rash guard. At first, I slid off the board even just paddling. I had to re-adjust and reduce power output just to stay on. Finally, I gave up and took off the rash guard. Skin on board is much better, and paddling was a breeze.

As mentioned, the surf was mostly flat, which suited me just fine. When the rare set rolled in, I took my sweet time paddling into the wave. Since we don’t have a whole lot of reef breaks in the Pacific Beach area (Sunset Cliffs being the closest), I had to adjust not just to the board, but to the wave, as well. I would routinely catch a wave too far to the side, only to have it flatten in front of me when we passed the reef.

But once I got used to all, hopping on the board and doing a straight wave was no issue. Actually, it was really fun, with the board following my instructions almost like my Baked Potato. Turns were not so hot, but I couldn’t tell whether that was the wave or the board.

Duck diving turned out to be much easier than I feared: the volume on the foamie is fairly small, so that you can easily push it under, and while it’s not really too stable, it handles well. I tried for a number of waves I didn’t catch, but with that size (under 1 foot), that’s not necessarily the board’s fault (or the rider’s – ahem).

I was running out of time when I saw a motorboat speeding by. I realized it would generate the only semi-decent wave of the morning, so I waited for the wake to reach me. Once it came, I turned around and paddled gently, waiting for the 1.5-foot monster to pick me up. What do you know, I was in the perfect spot for the angle and the Sushi propelled me forward. I hopped on and rode towards shore, with a father-and-son duo staring in admiration as I passed them and waved a shaka.

Conclusion: I don’t really have enough experience to make a final determination, but rest assured. From now on, my first instinct when traveling to a surfing destination is to pick up a Costco Sushi on landing. It handles fine, I won’t have to care about damaging it, and I won’t have to pay oversize luggage fees for my own boards, only to find them dinged on arrival. On a longer trip I even get a chance to sell the board on Craigslist, so that it’s almost free.

The Sushi is a winner!