Well, Ladies and Gentlemen, after many years of no major issues, I finally had a surfing accident. I am posting the picture along with this entry, but hid it after the jump to hide it from the more sensitive readers. It’s not pretty.

What happened? It was a nice Sunday morning at Black’s North Peak. It wasn’t too crowded, but a whole lot of douchebags around. You know, the kind that snakes your wave and when you call them on it, they say, “Sorry man! I didn’t see you!”

One guy, in particular, stood out. Young, maybe 25. Slender, with jet-black hair and a lust for waves but no skills to match the location. No patience and no skills is a terrible combination anywhere, but at Black’s it’s lethal (for others, apparently). He was getting frustrated at not catching as many waves as he thought he should have, just like everybody else. More and more, he started getting frantic, paddling into anything at as high a speed as he could manage, in the hope … I don’t know in what hope.

A particularly large set was rolling in, and the lineup moved out. I was constricted in my motion, since I had three guys (including this one) ahead of me, so I steered towards the area they had left open. The wave was approaching, but we were all out of the danger zone. 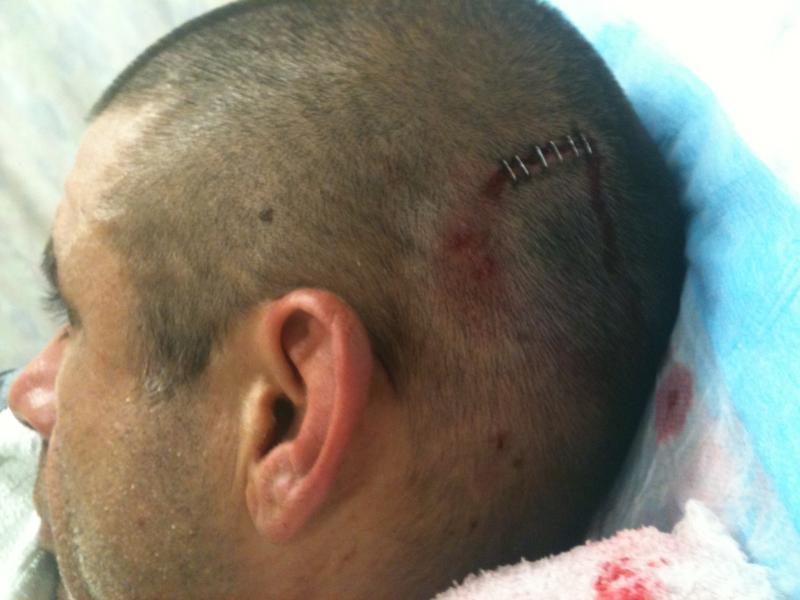 I was maybe ten feet behind when the guy suddenly turned around, paddling right at me. I looked at him, he saw me, but he went on. His board went its whole length over my head, and suddenly I felt the slicing pain of a fin on my head. I got out from under the water, checked that everything was OK, and felt my head. The sliced up portion was right there, bleeding profusely.

I started yelling at the guy as soon as he started saying he “didn’t see” me. Of course he didn’t see me: he didn’t have the time to see, because he had not been looking out for anything but his fun. If I think of all the beautiful waves I had to give up because someone was in my way, I’d cry. Not this one: he slices open my head, and his reaction was, “I said I am sorry.”

My automatic reaction was to continue surfing, but I realized that was extremely dangerous. Apparently, sharks are not attracted to human blood, but I was losing enough of it to require attention. I left the lineup immediately. Guess what the guy did? Yes, you are right, he continued surfing like nothing happened. Like it was my fault that I was in his way.

It didn’t help that the lifeguard on lookout didn’t move an inch. He just sat there on his perch, surveying the universe, not caring an ounce about the guy coming onto shore with a bleeding head. I wonder what it takes to get their attention: does it need to be a pool of blood six feet wide? Maybe it’s gunshot wounds? A fist fight on shore? Certainly a laceration to the head isn’t worthy.

My buddy and I walked up the hill and he volunteered to take me to the hospital. The guys coming up and down commented on the cut with faces filled with empathy pain. it must have been really bad. Really bad.

Kudos to Kaiser: I walked into the emergency room (at Zion Ave.), and a RN looked at me within two minutes. The nurse had dressed the wound and cleaned it shortly, and the doctor was there with the stapler in no time. The accident happened around 11:30, we got to the hospital shortly after noon, and by 2 I was all set and ready to pay. It’s going to be pretty expensive, but at least they were really quick and painless.

The pain, by the way, was manageable. The nurse explained that head wounds frequently don’t hurt as bad as on the rest of the body (something about a shortage of pain receptors on the head, I would assume). Even when the doctor stapled merrily away (as you know from looking at the picture, six staples), it didn’t hurt too bad.

Now, I have a throbbing headache, face having to remove the staples in a week, won’t be able to get into the water in as long, and when all is said an done, I’ll be out over $200 on medical costs. And all of that because some douche can’t look before he paddles into a wave that wasn’t even special.

I am really mad at him for being such a dickhead. He could have simply counted the number of waves and the number of people and gotten an idea of what he should fairly expect. I am mad at him for not coming out of the water to figure out I was OK. And I am mad at the life guard for doing absolutely nothing at all. If the culture of Black’s skews in favor of the wave hog and the douche, it’s because those life guards do not want to get involved. I wonder if it is because that’s just how they surf, themselves.