I was not happy when I read the surf report this morning. It called for FAIR TO GOOD conditions, which happens only once in a blue moon and was bound to attract the crowds. Not exactly what I needed on my first day back after the accident and the staples.

But my buddy said he wanted to go, and we went. 9:15, an unusual time, trying to get in after the morning mass and before the lunch crowd. The latter being notorious for pushiness: all the guys trying to squeeze as many 6-footers as they could in the lunch hour they got.

Conditions were amazing: a perfectly calm ocean, no kelp debris, light winds from the West. The water was strangely cold (the report said 63F, much colder than the 68-70 we had gotten used to). The crowd was hanging out fairly concentrated at the peak (from now on called The Zoo for obvious reaons).

I told my buddy that he should feel free to go into the water wherever he saw fit, but that I would have to avoid the crowd. The last thing I wanted was to have someone else’s find slice me open again, possibly on top of the slice I already got. (Would it be a parallel slice? A cross? Something fancier?)

END_OF_DOCUMENT_TOKEN_TO_BE_REPLACED

As you may have guessed from the number of entries on Linux on this blog, I extensively use it on pretty much all computers I own. It doesn’t matter if its an ancient 486 that sits in the basement and connects once a day to data sources to mangle them for presentation as email or the latest Ultrabook from Samsung. They all happily run Linux, in particular either Kubuntu or Ubuntu Server (my one exception being the crappy Acer netbook that only runs Fedora).

Recently, though, I wanted to talk with friends on Skype. I used my Kindle Fire HD, which runs Android and has a Skype app. The quality was terrible. Either the built-in camera is, or the software – in any case, despite tons of available bandwidth, I showed up on the other side very grainy and lacking sharpness of detail.

Now, while most people would think of that as a giant plus, I only heard complaints. So I switched to a laptop. Unfortunately, the same problem appeared there. I realized I still have one computer running Windows 7, that I never converted to Linux, so I fired it up. It had Skype pre-installed, I was ready to go, all set.

Well, what do you know, the experience was amusing, if a complete failure. I’ll share it here, because I was reminded of how odd Windows looks and feels once you leave it for a while. Not the operating system itself, but the ecosystem. You have to put up with a lot on there just to survive. I am not sure it’s worth it.

END_OF_DOCUMENT_TOKEN_TO_BE_REPLACED 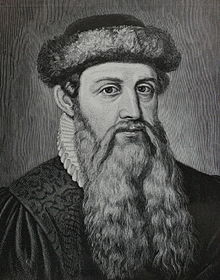 The new novel is shaping up real nice, thanks for asking. It is going to be much in the same vein as the first one, only bigger in scope and breadth. In particular, there will be a chronological component (read: history) that spans multiple centuries.

I am not going to give away the plot, but maybe I should share some of the research I did (some of it already surfaced while I was writing about the Meta Romuli). This time around, I’ll report back on the amusing time line of Gutenberg’s famous invention, movable type.

Johannes Gutenberg was a rich family’s offspring in Western Germany. His parents belonged to one of the powerful and aristocratic families of Eltville am Rhein, near Mainz. Somehow he got involved in metal working (which seems an odd occupation for a rich kid) and managed to mismanage his skill.

You’d think there isn’t a whole lot to go wrong in metal working, but apparently he overextended himself (and a bunch of co-investors). Aachen, the imperial capital of Charlemagne, was about to display its holy relics, so Gutenberg had metal mirrors made. They were to be sold as “souvenirs” to the faithful, who believed (it’s the mid-1400s, after all) that the metal could catch the holiness of the relics. (Apparently, glass mirrors wouldn’t do. Although of course the glass just protects a thin metal surface.)