[Note: Amazon has published a series of pilots for a variety of shows, asking viewers for their opinion on which ones should continue. It’s an innovative way to farm out a choice the company is not really capable of making, since this is their first attempt at content production.] 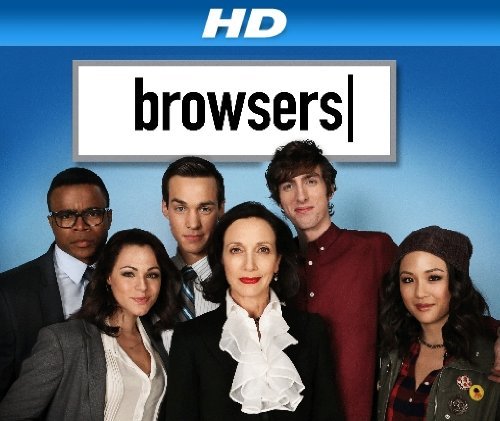 Four enterprising young folks start their internship at the online magazine, Gush. They are told they are to browse the web and find interesting content, to the tune of 40 amazing links a day. After one week, one of them is going to get fired. Justin, annoying fifth-of-six-executive-assistants to the vicious Johanna, seems amused at the turmoil he inflicts. Johanna, when she shows up, is a veritable meanbag. Turmoil ensues, and in the end nobody is as evil as they seemed.

The team that created this show has impressive credentials and it is a little surprising they didn’t see the potential pitfalls of their approach. Surely they should have known that four equivalent protagonists are hard to flesh out when they have to compete with a machine in the background and musical numbers in the foreground. Indeed, the four come across as stereotypes through and through, and it’s really hard to think of them as anything but The Pretty Girl, The Compulsive Tweeter, The Gay Activist, and The Asian Pothead. The problem, of course, is not with the setup, but with the constraint of having to compete on the strength of the pilot alone.

While we find Betty multiplied by four, the remaining cast of Ugly Betty has to be combined in single characters in this show. Bebe Neuwirth (of Cheers and Frasier fame) is Johanna, the magazine’s editor/owner. As such, she mainly replaces the position of Wilhelmina in Ugly Betty. As hard as that seems to be, Bebe Neuwirth’s Johanna is much too kind and nice. Wilhelmina, portrayed by the absolutely smashing Vanessa Williams, was a thermonuclear explosion in every episode of that show. Johanna is more a hen mother turned sour, and it’s hard to see how she would create the comedic tension required.

Marc and Amanda from Ugly Betty merge into the tight-waisted and mean-spirited Justin, the apparent main antagonist of the four interns. The actor, Chris Wood, doesn’t do much with this role, which could have been extremely powerful. But then, it’s a pilot.

The staging of the musical numbers reminds me of a Bollywood movie. Where Glee uses a natural trap for the songs (namely the performances of a glee club), there is no such introduction in this show. Actors just leap into song in mid-scene, which works, but is a little jarring. Nothing that couldn’t be fixed in later episodes.

Most sorely missing from the pilot were the fundamentals: what is the magazine about, what motivates the interns, what are their challenges at the magazine. With Ugly Betty (which had one of the best pilots of any show), this was obvious and obviously spelled out: Betty is a high-brow girl that looks down on fashion, but the only job she could find (by chance and not by competence) is in a fashion magazine; there she is ridiculed for her weight and lacking fashion sense.

In Browsers, all we find out is that the four interns are trying to escape their circumstances and trying to make it in the big wide world. That’s a little generic. Of the people in the magazine we see a bunch, but nobody interacts with the interns. We don’t really know what Gush is about, only that it has a huge number of “properties” that need to be fed with fresh content.

Personally, I would redo the pilot. The show has potential, the pilot doesn’t.