Skip to content
HomeComputersHardwareKubuntu 12.10 Quantal on a Samsung Series 9 (NP900X3D) 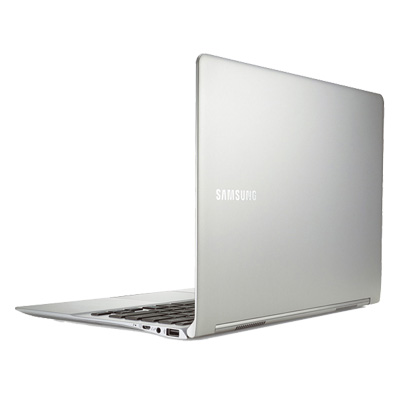 I had been following Ultrabooks for a while, but they seemed constantly overpriced. I loved the form factor, but the aesthetics and better hardware didn’t seem to justify a 100% increase in price. Especially since I am not really short on laptops.

Something about the Series 9, though, was different. It was faster, lighter, thinner, and had a better screen resolution than other Ultrabooks, and those were my requirements to a tee. It also runs Windows 8, which I hadn’t used before, and I needed a test machine.

When Amazon lowered the price from sticker ($999) to $699, I knew I was going to buy it. I did, and I can safely say this is my new favorite laptop.

In the following you’ll find a brief review and instructions or installing and running the latest Kubuntu, Quantal Quetzal, on it.

The primary reason I bought this laptop is its beauty. It’s thin, it’s light, it’s sleek. It’s like having an Apple MacBook Air, but without the hefty price tag, and without the plasticky look.

The frame is apparently an aluminum alloy. It resists finger smudges like no other. The laptop feels solid, but not bulky. Particularly exciting is the touchpad, smooth as silk. A little more troublesome the decision to do without the mouse buttons on the touchpad – you use the bottom left and right of the pad as buttons, which is quite inaccurate (as it also moved the pointer).

The keyboard is very usable. Ultrabooks by nature have to have thin keyboards, which sometimes ends up being frustrating (as was the case in the Toshiba Portege ultrabook I bought). Not here: the keys are thin, but they are precise. You know when you pressed one, and there is no issue with keys having different pressure points (as was the case with the other laptop).

The screen is absolutely fantastic. The resolution was bumped up from the standard 1366×768 to a much more generous 1600×900. Still not 1080 HD, but certainly a great resolution for actual work. (As a side note, it seems increasingly idiotic that Google could push out a $400 device that has a 2560×1600 display, while laptop manufacturers still think they can make do with crummy graphics). I did notice an occasionally stubborn red dot on the screen, but a single pixel is not going to turn me crazy – yet.

The ports are the usual – none on the rear, though, so if you want to attach something unusual, you’ll have to use USB.

An honorable mention also goes to the charger. The power supply is thinner and lighter than in other laptops, which shows both attention to detail on Samsung’s part and a willingness to listen to customers. I mean, why would you buy a half-inch thick laptop if the brick that comes with it is 3 inches high?

Of course I had heard horrible things about Windows 8, but I didn’t care. I needed it for testing and it was going to be the primary software running on this laptop.

I booted up Win8 and got into the Metro screen. I had read how to get to the desktop. I went. Then I wanted to create a recovery disk, as suggested in the manual.

It was a mess. It was as if Microsoft had forgotten why people loved the Start Menu and had decided to go back to the days of DOS. There was no central way to figure out anything. I completely lost it when I realized some things were best left to cryptic keyboard combinations that left me randomly poking at the screen. Was it Win+Q that brought out the list of apps or Win+X. Neither made any sense whatsoever, and more to the point the one thing that seemed so incredibly intuitive about older releases of Windows 8, like pressing the Windows key to get help, didn’t do anything.

I fought for a long time until I figured out the recovery piece. Some of the stuff was plain stupid – like the fact there are two recovery software packages on the laptop, one from Microsoft and one from Samsung. But most of it was just asinine poking around and looking up stuff on the Internet.

It doesn’t help that the computer manages the Metro screen with the zeal of a marketing professional. There were more plugs for media on there than actually useful application. And for some reason there was no square for settings. You actually have to go to a right side menu stupidly called the Charms Menu for that.

Unhappy as I was with Windows 8, I knew installing Linux was going to be painful. That’s because Microsoft forced all manufacturers to use UEFI, a secure boot initiative whose value I find doubtable.

To even just run Linux from a USB stick, you first have to go to the BIOS. You hit F2 while the computer is booting (hold the key after you turn on the computer). You are greeted (more: confronted) with a DOS-looking text-mode interface. Here you want to move to the right (keys) to the BOOT section, where you disable UEFI and turn on legacy OS booting. (I can add images if anyone wants them).

Once you have done that, booting from USB stick (or presumably DVD) is not a problem.

I booted both Kubuntu 12.10 32-bit and 64-bit. What completely bowled me over was the speed at which the 64-bit version ran. It was amazingly usable from stick (not a fast medium), and factors faster than the 32-bit version. It beat WIndows 8 by far, and provided more functionality to boot.

Once you run Linux from USB stick, you want to first connect to the Internet. Once you have done that, start the installer (on the desktop). Select the first few options until you get to partitioning.

I decided to select the option to take the entire drive. I didn’t have it encrypt the home directories, since I preferred having a whole drive password (which comes in the next screen).

Once that was done, the computer installed merrily away and even downloaded updates from the Internet (which is why you should first connect to it).

The Sammy works like a charm. Booting is incredibly fast, and I get to all my configured apps with no problem. I haven’t tested much of the hardware, but I can already see that the special keys mostly work out of the box. There are other blog posts about finessing the configuration, especially when it comes to the keyboard backlight (which is definitely not the strongest suit of the laptop – but I am a touch-typer anyways.)

The one thing that seems to be a problem, currently, is that the touchpad dies randomly after coming back from sleep state. The problem has been noted in many posts, and none of the workarounds I saw actually do the trick for me.

I’ll update this post if I find a solution.