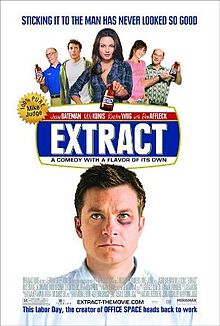 Mike Judge is a funny guy. Office Space and Idiocracy are some of the most intriguingly humorous movies in recent history, with Idiocracy gaining renewed hilarity because Microsoft’s Metro user interface looks remarkably like the pictogram computer interface in the movie.

Extract is a movie by Mike Judge, who wrote, directed, produced, and even cameo-ed in it. But it’s funny only in stretches, without an overall funny theme. Given how the other two movies worked out, that’s a little short of expectations, which explains why the movie is already available on Netflix.

Then everything falls apart. The girl with whom he wants to have an affair (played by Mila Kunis, the visual and emotional centerpiece of the movie) is a con artist. The mischief his workers are up to ends up causing an accident that jeopardizes the sale. The guy he sends to test his wife’s fidelity falls in love with her.

At the center of a universe that is falling apart, Joel keeps it together. He realizes the con and foils the artist’s plot. He decides he is meant to run his own company and not sell out. And he finds his way back to his wife.

Extract is a comedy in the same sense that Dante’s Comedy is one. It has a happy ending. That’s it. Many of the moments that are supposed to be funny come across simply as mean. I am particularly referring to the scene where Joel agrees to a session with a pothead that scares him with mock-violent outbursts. Nothing funny about that.

More than anything, though, it is the message that rubbed me the wrong way. The workers in the factory are consistently displayed as lazy, scheming, incompetent, and worse. They consistently misinterpret Joel’s intentions, but still somehow constantly have respect for him.

One of the workers, the fork lift driver, moonlights in a hard rock band. He is incredibly unreliable at work, and we see several scenes where he dumps cases full of extract on the factory floor out of incompetence. He is also consistently talking about how much he works, or how much of the company he built. It’s supposed to be comical, and the reason he hasn’t been let go is left unanswered. He will cause the accident that puts the company in jeopardy and ask for a raise the very next day. it’s supposed to be funny, but one just wonders: why didn’t you fire him? He’s clearly a danger to everyone, and you as a manager should have known that someone with such a terrible record would eventually cause harm.

It’s really the manager in me that dislikes the plot, in that it’s too fond of managers, and rips everyone else apart.

There are two scenes, though, that I found remarkable: one is when Joel decides to send the dumbest kid on the block as a gigolo to seduce his wife. The kid, played remarkably well, calls up Joel and tells him he succeeded. Joel wants to know details, presumably to make sure the kid is not just lying, and a dream sequence is played, narrated by the kid.

The second scene is when Joel’s wife finally confronts the nosy neighbor and tells him to shove it. It’s a long diatribe that has us viewers join the neighbor in a “No she didn’t just say that!” face, that culminates in the guy keeling over, dead. (It’s the guy’s funeral that ends up being the moment Joel and his wife find each other again.)

All in all, not funny enough to stand the message, and without a message meaningful enough to make you forgive the lack of funny.