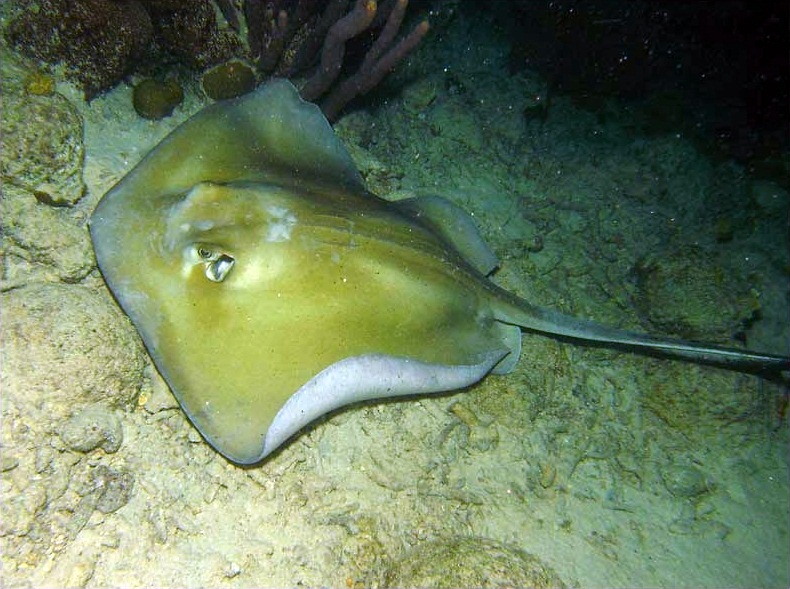 So, last year, in my continuing quest not to be San Diego’s Worst Surfer, I took one step too far. In particular, the step led me onto a stingray, a lovely little creature that (understandably) is not too fond of being stepped on. Unfortunately, it decides to make its point by stinging (hence the name) and injecting a venom into your flesh.

It all happened very quickly, yet felt like a slow motion movie. I stepped into one of those sand cones that form in agitated waters. My foot moved into the center of the funnel, and there it felt something squishy, and then something that felt a lot like a bite. After a short period, another thing that felt like a bite. Then I fell backwards into the water and stumbled back to shore.

Was it a stingray? I don’t know. As said, it felt a lot more like a bite than a sting (not that I have all the experience in the world with being stung and bitten). At the same time, there was definitely the injection of a venom, and it hurt really bad. To make things more confusing, it didn’t hurt as bad as everybody told me it was going to hurt. I was confused.

The most important thing, as with any venom, is to gauge your reaction. I knew I am allergic to yellow jacket stings from a very, very unfortunate incident in Portland, so I wanted to risk nothing. I got someone’s attention and asked if they could keep an eye on me, just in case I passed out. (I assume they understood they should call 911 in case I did, and not steal my wallet; I should have been explicit about that…)

On my towel, I checked the affected area on my left big toe. The only thing I saw was a small round incision. It was red at the center, and it was the focal point of the pain that was radiating from there. The pain, by the way, felt a lot like a worse version of pins and needles (paresthesia). Just like P&N, it went away after a period of time (about 30 minutes in this case).

Fast forward to a few weeks ago. I hadn’t thought about the incident for months (this was last November) but had seen a number of stingray injuries at the beach in the course of time. I also started surfing in La Jolla Shores, which meant there was a shower waiting for me at the end of each session. (One of the drawbacks of surfing is the eternal layer of smelly salt on your skin after you dry out without a shower. Oh, and the smell is crude oil, just in case you are wondering who’s polluting…)

One day, I looked at the bottom of my foot and saw something white sticking out of the underside of the left big toe. It was small, it was very white, and it looked like the plantar warts I had gotten once many, many years ago from taking a shower at the gym in Rome. (That gym was filthy!)

I know I shouldn’t have, but I played with that thing right then and there at the showers. Lo and behold, after pulling too strong, a searing pain blinded me momentarily, and by the time I looked down again, I noticed that the white thing was picked between my thumb and index fingers, along with what looked like the better half of my toe. A glaring wound on the toe itself matched up with what I was holding in my hand.

I thought I had pulled out a wart, but I doubt that’s what it looks like. So, now, after a few weeks and seeing that there is no wart re-forming and that the skin is healing just fine, I am ready to accept the truth.

For months I’ve been walking around with an alien stinger in my toe. And I didn’t know about it. It’s like those people that live infested by that skin worm and don’t know it until it bites its way through the skin and pokes out. You don’t believe me? Check out the video!