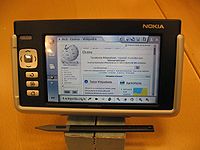 To all my friends with iPads (and there is a shocking number of them): I had a tablet years before you did. Yes, your tablet may be shiny and a joy to use, but mine is stored in a closet with the HP Omnibook I had in 1994 and the Sharp Zaurus I held in my hands in 2002. The tablet is a 7″ Nokia N770, a tiny little bundle of joy I bought in 2005. It was expensive, it was slow, it was buggy, but it was mine. And it ran Linux, probably 90% of the reason I bought it in the first place.

It’s five years later and Apple came up with the iPad. The iPad was an instant success, the N770 was a modest failure. I say modest because it sold poorly, but still much better than the product Nokia came up with around the same time the iPad launched, which was the Nokia N900 (proud owner!). How is it possible that the company, Nokia, could identify the category (tablet) that would catapult Apple to success five full years before its rival did, and yet not capitalize on its discovery?

First, there were technical flaws. The N770 was atrociously, painfully slow. It was severely underpowered from the start, and the tiny on-board memory (64M) made things worse. Despite the slow battery, the thing wouldn’t run for long without a power supply, severely limiting its usefulness. None of that really mattered, though, and those things could have been (and partially were) addressed in successor models.

Most importantly, though, the strategy sucked. The N770 was too big and bulky to be a phone, and too small and fragile to be a tablet. The screen was excellent, but it was tiny (Samsung Galaxy, listen!). The software was good, but it needed attention. We developers would have loved to help, but the documentation was awful.

In short, it was clear when buying that Nokia wasn’t really serious about the N770. They didn’t put enough manpower and money into the device to make it a success, forcing it to languish where it could have done really well.

The problem with the N900 was that it always felt like a toy. The battery life on mine was so atrocious, I couldn’t leave the house without a fully charged spare battery. The screen was gorgeous, but it’s still a tiny screen. Most of all, though, the software was so buggy, the phone was barely usable.

That, of course, is the part that is really inexcusable. It doesn’t take genius to fix bugs, it just takes manpower and money. A company that has a closed source system (like Apple) has to throw in both at the same time, but Nokia could have solved the problem very easily and rapidly with money alone. They could have just sponsored bug-fixing bounties and had the open source community fix the issues. I am talking about serious problems, by the way, like the phone rebooting in the middle of a phone call, or slowing down to a crawl after 12 hours of standby.

There was one bug that particularly annoyed me: when I bought the N800, I got a bluetooth keyboard to be able to type for real. It worked like a charm, I could do email at 10x the speed of the tablet keyboard, I could write notes, edit documents, all on a little device. It was wonderful. Then, the N900 – bluetooth keyboard doesn’t work. The problem was much worse than with the N800, because the N900 ran Python. So if you wanted, you could have just programmed on the thing directly, but Nokia wouldn’t go for it. Then the curse of time kicked in: once I realized I would have to work to fix the bug myself, I lost interest in the device as a programming platform.

My realization that the bug needed fixing and that Nokia wasn’t going to do anything about it came from Bugzilla. I read the bug report, read that whatever Nokia engineer was assigned to it had decided that the N900 wasn’t going to be used that way, and so closed the bug to get rid of the extra work load.

Not his/her problem. The mistake was on his company’s part.

But what do you know, Nokia doesn’t understand the importance of software.