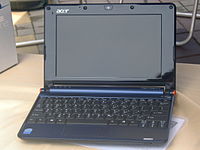 This is the first laptop I buy that comes with Linux preinstalled. Unfortunately, it’s a relatively unknown distribution, and I will have to replace it with Kubuntu – but otherwise it’s amazing to see thing finally moving in the direction of economic logic.

The Aspire 1 is a netbook, which by now defines a very clear category in the market – a category that is oddly much more consistent internally than other notebook segments. We have a small form factor (screens are 10" or below in diagonal, weight is typically under 3 lbs), an attention to productivity vs. gaming, and the adoption of standard operating systems (Linux or Windows XP, mostly).

I compared different netbooks on the market and made my choice based mostly on the keyboard and screen. That’s the two things that I most use in a netbook, and all additional features are merely secondary. Is one faster than the other? Who cares, if I can easily switch from OpenOffice Writer to KWrite if I want it zippier?

The Aspire 1 didn’t disappoint: it is tiny and functional, the keyboard feels better than the one on the Lenovo Thinkpad I am writing on, and the screen is brilliant and beautiful.

I am really intrigued, though, by the attention to detail that went into the Linpus distribution. There are few applications available on the netbook, but they are all well thought out. The network applet, for instance, automatically connects on ethernet and WiFi – seamless to a user. It even asks in KNetworkManager form for keys when it tries to connect to an encrypted network (WEP only, though, no WPA).

The skimpy memory is a real drag, and I needed to upgrade. To do so, you have to take the whole thing apart, removing the keyboard, the outer case, the secondary board, and then the motherboard. It’s a really annoying thing to do, especially considering that 1GB cost me retail less than $20. Why on earth wouldn’t Acer have a netbook with the 1.5GB or at least the 1GB option available? I can’t imagine a lot of people saying that they are willing to spend $320 for a netbook with .5GB, but not $340 for a 1GB netbook.

The next thing was installing Kubuntu. Maybe I should have gone for Xubuntu, and I may try that later if KDE is too slow, but for now I got myself the latest Kubuntu KDE4 remix, and I am going to install that.

One word about the Internet: I couldn’t have done what I did with the little thing without online forums and YouTube videos. There is an excellent forum for Acer Aspire 1 users, and many point there to the YouTube Howto videos for explanations on the upgrade process. Makes perfect sense, but all these things wouldn’t have been available just a few years ago.