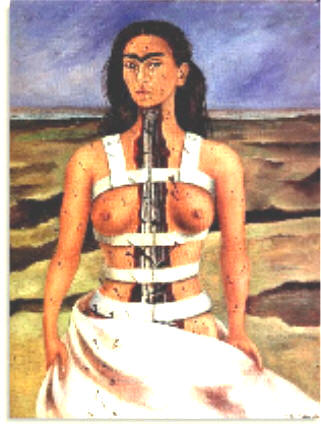 Frida and I go way back, to ancient times where she wasn’t this popular icon of feminism and empowerment she’s become ever after the movie with Salma Hayek. I had seen a panel of hers, a monstruous affair with a crippled woman at the center held aloft in the sky and held together by braces – an icon of pain bursting forth in a starfield of passion.

Having grown in two cultures, I have always felt the duality of the passionate Italian and the rule-bound German curse me. As I saw the panel, it struck a chord within me, almost talking to this conflicted side of mine, speaking of the inner anguish that comes from having to live by two very different sets of rules.

Turns out, I found out much later, that Frida had that thing in common with me: she was the daughter of a German from Pforzheim and of a Mexican of mostly indigenous descent. That gave me an instant connection with her that has a degree I cannot share with most artists, as dual upbringing is quite rare.

It so comes that, because of the personal nature of my connection to her, I am always surprised by the popularity she enjoys. The exhibit at the SFMOMA, then, had all the trappings of the most popular ones: long lines, timed entrance (“Do you want to get in at 2:30 or 3:00?”), a creepy creeping line that snakes its way through the exhibit.

One might argue, as I’ll certainly do, that Frida’s work is not that highly developed from a purely technical perspective. Her art is almost always a little crude, with little passion for artisanship. She depicts the less fortunate side of life, an almost inwardly focused outlook, in which she is very, too frequently centerpiece. On first thought, she might not seem the crowd-pleaser, unlike Hockney, or Ansel Adams.

What I found out is that Frida has the “poor soul” bonus. The pain she had to endure all life long, the series of ailments she went through, the unhappy marriage to the (then much more famous than her) painter Diego Rivera – all of them reflected in her art. Much better than just the “upright woman artist” like Artemisia Gentileschi, almost in the category of the “blind tenor”.

This made for very strange viewing. The line crept forward at a glacial pace while the patrons tried to figure out something on each painting. I am not sure what they were looking for, I could only imagine they were looking for signs of externalization of the pain. To make it easier for the prospective viewer: these signs are unmistakable, everywhere, and you really cannot miss them.

Unfortunately, the curator focused on this aspect of Frida’s life a lot. Every accompanying explanation (bilingual English/Spanish) repeats how much Frida suffered, how much she was disappointed by her repeated marriages to Rivera. Yet, looking at her only as a “poor soul” does an enormous disservice to her art – which is far greater than both her technique and the autobiographical aspect.

I never saw again that first painting of hers that had attracted me magically, and none of the paintings on display had the same magnetic power. Of course, they were deprived of such power by the way the crowd was giving equal attention to all paintings, like sheep unable to distinguish between a blade of grass and a thorny brush. I confess I’d much rather have had a small exhibit (this one is really huge in number of paintings) with less fanfare.

But if you don’t know much about Frida, please do go. My personal favorites at the exhibit: Moises and The Suicide of Dorothy Hale. Must see.